Kevin has been slower to climb on board the Pit Bull band wagon and sometimes I find his struggle to come to grips with Pit Bull ownership amusing.  There are times when he makes fun of Ray for being such a Mama’s boy and sitting on my lap or when he trembles at the sound of the mower.  He thinks Ray doesn’t look enough like a Pit Bull because of his gloriously floppy ears, which we won’t crop.  He thinks Ray is a typical Pit Bull when he is wound up, because he still jumps and nips and it’s sometimes hard to settle him.  I know this is not so much “typical Pit” but more “typical puppy” though, wrapped up in a stereotype, it can seem more threatening.

Over the weekend, Ray and I again went shopping and socializing.  He visited The Green Dog and then we went for a visit to PetSmart where he spent every cent of the $25 gift card that I won.  While at the Green Dog, we were discussing some issues, Ray was helping himself to the contents of the toy basket and “talking” to the toys.  Unfortunately, one of the visitors to the store looked at him with raised eyebrows and cautioned the family not to approach him.  While that is always good advice, it was a little belated as the daughter had already pet him.  Not everyone is familiar with Pittie talk and I forget that it can sound pretty intimidating.
While at PetSmart we heard a boy asking his dad what Ray was and the response was “that’s a Pit Bull.”  We also had a lady seek us out because her dogs are small and she relishes opportunities to pet “larger” dogs.  Ray also thoroughly charmed one of the employees who was completely impressed with his manners and his skills.
Today, my dear husband bought me the refrigerator that I’ve been wanting and since the store owner is also our neighbor, we got it delivered quite quickly.  While they were setting up, M asked if the baby gates were up because of the cats and Kevin said, “No, they’re for the dog.”  M, our neighbor, said he didn’t realize we had a dog so they went to see little Ray-Ray, who at the time was sunning himself on his patio pillow.  “Oh, a Pit, and he’s still just a puppy!  He’s cute, doesn’t he ever bark?”  No, Ray rarely barks and usually only at toys or wayward kibble that make their way under the furniture. 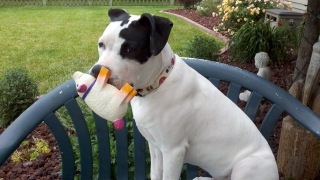 And to Kevin?  Weren’t you gratified that Ray is immediately recognizable as a Pit Bull?