The behavior that we triple-quadruple-extra reinforce with Ray is “go to your mat.”  We use it to calm him down, deliver treats, kongs and anything else.  We use a variety of mats as well, one of them actually being in his crate.  The crate used to be called night-night, but after the short lived time period when Ray was no longer crated, “night-night” became a not happy word and “mat” replaced it. 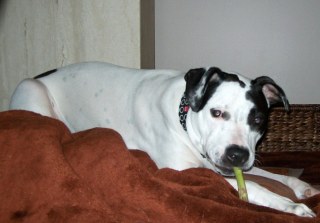 We’ve used “go to your mat” so much that if Ray is really interested in scoring whatever tasty tidbit we may be possessing, he will sometimes run to his mat as an offering in exchage for the coveted treat.  Yeah, it’s that good.

As good as he is at offering behaviors, I think we become used to stretching his abilities as I recently heard Asia, the new mama, saying to Ray as she was eating a cookie, “Do you want a bite?  Where might you go if you want a bite?”  I turned to her, astonished, saying  that Ray couldn’t reason like that…just as Ray rushed past me to hop on his mat.

As much as I would like to believe my boy is a genius who can reason, I know it was just one of those times where he offered up the behavior that he thought we wanted, because the next time she tried that line, he jumped up and nearly took the cookie from her hand.  Genius?  Maybe.  Cookie monster?  Absolutely.

What is your best trick/behavior?