In the summer of 2011 we put our house up for sale and ended up having it on the market for just under a year.  Nearly every summer, I’ve expressed my desire for an in ground pool and we figured that it would be easier and more cost effective to find a house with a pool already done.  Our home sale was a nightmare of epic proportions so we took it off the market and installed a pool.

After not even an entire year with our wonderful pool, we have again put our house on the market.  With the pool, we have limited space for Ray to run and very little space for a foster.  Priorities, right?   Naturally with a pool we’ve had a lot of showings in just a week and one of them, I discovered was for the day after I first met the puppy.  Knowing the kind of stress we have, especially my foster-resistant husband, on the eve of a showing, E and I formulated a plan; I would pick up Puppy on my lunch hour and E would puppy sit until I get off work.

The best laid plans crashed when I lost the scrap of paper with the address, and I ended up driving up and down the street a few times searching.   It ended up not being  the same one I was near when I found Puppy.  I narrowed had it down with the help of my memory and the recognition of the car from the previous day.  It was parked in the drive, so I began ringing the doorbell, pounding knocking on the door and “helloooo”-ing at open windows.  I saw a dog chained in the backyard.  She lay there without making a peep, but I saw nary a sign of Puppy.  I texted E with my findings and went back to work vowing to return  at five.

At five, the same car was in the drive and after the same knocking and shouting, I just stood near the back gate and  shouted G’s name over and over until a young man appeared.  I asked if they still had the puppy and if they were still willing to turn him over to me.  “Smokey” was wearing the collar that I had gotten from the shelter and though I was told the previous day that he already had a rabies tag at home, my tag was on the collar. 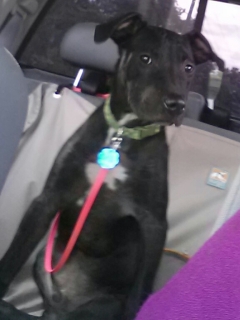 He was obviously confused by being handed over, but in the truck he settled with a dehydrated duck foot and rode off to a new future.  What that future held for him was still a bit murky about the details.  He definitely needed a bath, some TLC, a microchip and a neuter, so in that order we set out to check off the list.  I had gotten my sister’s agreement to foster if necessary and her rescue could arrange adoption if we needed to go that route, so I felt pretty good that no matter what, he would be taken care of. 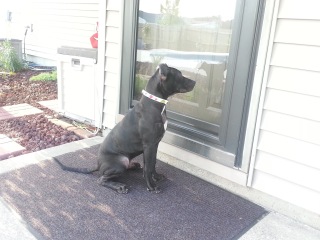 Kevin spent most of the day that I was to pick up “Smokey” on the phone trying to find an adopter. Because of the upheaval in our lives right now and because of the mystery of the pup’s past, Kevin wasn’t sold. Until they met. I had lined up a foster (with my incredible sister) and gotten a Rescue committment, if necessary, but waited to see what Kevin’s reaction would be.

I had been considering the name Marcellus (he’s black, he’s bald…) but this lanky little guy was not up to carrying that name so after we bandied about a few possibilities, we chose the one that was nearly Ray’s name. Julius.

Julius was understandably timid the first day or two. We knew he was not housebroken so opted to crate him in the smaller of our two crates. This is the one Ray used for his first six or seven months and was the perfect size for Julius. He seemed grateful for the safe spot and took to it right away. Because the weather has been cooler, and we had to keep the boys separated at first, we put the crate in the garage so that he would be close to the family room and us.

The first night went extremely well with a dry and clean crate, the successive nights followed suit and we’ve kept the crated door open during the day and have been rewarded with a clean and dry garage. We’ve also had successful visits in the house. With these early visits, I anticipate a little bit of counter surfing, but he is so easily corrected so far.

Surprisingly, or maybe not, I’d say that I was the hardest sell. Adopting Julius would put an end to my fostering plans, at least for the forseeable future and if we could be assured of him going to a great home, I would be all for it. The other tough sell would be Ray himself. Back when we came so close to adopting or at least fostering King, I shared a reservation that I had in a conversation with Jessica, our shelter Director. My fear was that with King being so awesome, that Ray may suffer by comparison and Julius appears to be no different.

Ray is a work in progress, he’s challenging, frustrating and awesome. He is my baby, my puppy and my heart dog and nothing will ever change that. Julius is great and I love him. He has the makings of a great ambassadog and will probably be the one taken out to many of the outings Ray previously attended. Ray will still shop in his favorite stores and we will never stop with his training.
I can’t even begin to count how many hearts Julius has collected in just  a few days.  He’s absolutely adorable and beyond sweet.

So, is he a Foster or a Lockhart?