Yesterday, I talked about some of the differences between Ray and Jubes, ending with Julius’ freedom run from his former home (Smokey’s home) into my heart.

Some of the similarities of the two are that they are both Mama’s boys (ass attachments, my husband calls them, though I think entourage has a nice ring to it), though they both love all of our family members to pieces.  They are both great with the baby, with Ray having a gentler mouth and Julius being smaller, so when he bumps into her, usually the impact is slightly less dramatic.  Ray is very guttural when communicating but rarely barks.  Julius is never guttural but barks quite a bit.  We’re working on that barking thing but it’s a slow process.

Both boys are chipped and I’m sure that if Ray ever found himself outside the gate, he would take full advantage and snoop out all of the tasty parts of the neighborhood.  Julius showed us that while he might not be an Einstein, he has his street smarts and he’s not afraid to use them. 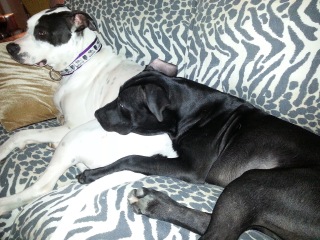 Julius may not be housebroken, but he came to our home old enough to have been crate trained for whatever reason.  After the first few nights in the smaller of our two crates with absolutely no incidents, I moved him into the extra large crate.  That gave him more leg room for the days we were all at work and still he maintained a clean, dry crate.  Housebreaking is a slightly different matter.  He knows what “outside to go potty” means, but he doesn’t go to the door to ask like Ray does.  By keeping a watchful eye, we’ve kept accidents to a very minuscule number.

One such accident did occur this week when our Directv guy was installing some equipment.  I was at work and received a text from Asia.  “Kevin just let Juli out and forgot the gate was open and all of a sudden Juli is at the front door looking in, lol.”

I immediately saw red, but knew there would be no ‘lol’ if the matter was serious.  Apparently, Juli started to potty on the floor, so Kevin let him out, the gate was open because of the Directv guy and Juli ran from the back yard to the front door!  Kevin’s first thought was that dog at the front door looks just like Julius!

So, my anthropomorphic conjecture is that Smokey ran from his home seeking a better life as Julius.  Julius knows when things are good and has no desire to wander farther than his own front porch.

11 thoughts on “Freedom is Home”