Over the weekend, the Allen County SPCA and 3 other groups participated in an Adoption Tent Event at PetSmart and though I had signed up to volunteer on Sunday but considering it was my local PetSmart, I stopped by on Saturday to see how things were going. I knew that the shelter was closed and that all of the adoptable dogs were to be out at the event but I was only mildly surprised and quite saddened to see that Deuce was not in attendance.

If you’ve been with us either on Facebook or here, you know that Deuce has been in and out and around my world for a while. Actually, he first came to the shelter in February, a sweet little guy who reminded me of both Ray (looks) and Julius (demeanor) he was subsequently adopted. A few short months later, Deuce came back to the shelter. He was extremely submissive upon his return but still just as sweet as can be. He was adopted again and returned in just a few days. The details are fairly murky, but the bottom line is that Deuce was aggressive towards his adopted fur sibling despite the fact that the interaction at the shelter went well. The other dog was older and special needs, so the adopter felt that he wouldn’t be able to work through Deuce’s issues as well. 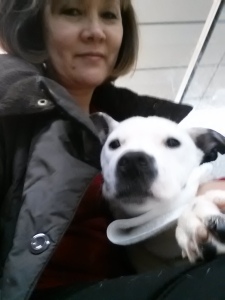 Deuce is now back at the shelter with a label: Dog Aggressive. I believe a more correct label is Dog Selective since Deuce had a good buddy he played with at the shelter. (Great article from BAD RAP here.) He and Ava had some great play dates together with success, though he doesn’t automatically like every dog. He also is now living in the Director’s office, which is a promotion usually given to a longer resident or an animal who might need some special care. Relieving him of the stress of the kennels has really allowed his sweet and happy personality shine through. 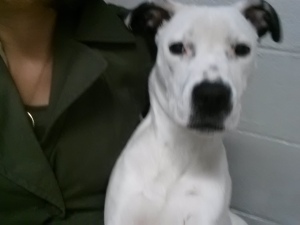 I noticed that during walks around the neighborhood, where there are always dogs along the way who are eager to bark and stake out their territory, Deuce “gets through” the walk. He takes some interest but not too much in the surroundings. He gets through the walk with his ears back and tail tucked then returns to the shelter-his shelter- with a relaxed and happily wagging tail. He is safe and sound yet again.

So, Deuce did not go to Pet Expo, which was a good call. He would have been way too overwhelmed with all of the sights and sounds, but since the Tent Event was outdoors with lots of space, I asked if he could come on Sunday if I handled him and took great care to make sure his world stayed safe. Be careful what you ask for. Since this was such a large event, the animals were being transported up in the shelter’s fancy wrapped vans but I ended up making the trip down to collect Deuce separately. Being early, we made a little side stop at the Peaceabull house to collect a few more things and give Deuce a chance to unwind a bit more.

Stop by tomorrow to find out how Deuce fared at the event.