Continuing our Guest Post/Adopt a Shelter Dog/Pitbull Awareness Month/Pack Walk Success theme, our friend and the other founder of The Bully Collective, Rachel, has penned a post about her beloved Gus and the dogs he shares his life with.  (All photos provided by Rachel Hoening and credited properly.)

My intrigue for pitbull type dogs probably started when my sister and her husband drove from Indianapolis to New York on their first anniversary to adopt a “death-row” dog. Due to some of the house restrictions in New York, pitbull type dogs are abundant within the animal care and control facilities as well as other shelters and rescues. In an effort to help re-home some of these dogs, a Facebook page was created to advertise their availability to the public. My sister is a follower of these pages which is what led to their long-distance adoption. She couldn’t bear the thought of another healthy, well-behaved dog losing its life so, to New York they went. When she first informed me of their plans, I was a bit leery of the idea. They already had three dogs at home whom would not get an opportunity to meet the new dog prior to the trek back home to Indiana. I also knew that their time with the potential adoptees would be limited due to the circumstances. I couldn’t help but think, “what if the dogs don’t get along? Then what?” I would be lying if I said that the breed she was seeking didn’t contribute to my hesitation to support them fully in this decision. To this point in my life, my experience with pitbull type dogs had been limited and I was very aware of the negative press and connotation that seem to follow these dogs around like a shadow. Regardless of what I thought, their minds were made up so, I held my breath, hoped for the best, and anxiously awaited their arrival back to the Hoosier state.

On October 16th, 2011, Sunshine officially became a member of our crazy, dog-loving family. This was also the day that my opinion of these dogs began to change. There was certainly an adjustment period for my sister, her husband, and the dogs, but that was no different than any other adoption story. She is just a dog. She is my fur-niece and I am proud to call her that. She loves frisbee, she enjoys sharing bananas with her dad at breakfast and she gives the best smooches around. She is just a dog.

Fast-forward two years…I had taken a job in Fort Wayne, Indiana at a local university that was just minutes from our local animal care and control facility. Up to this point in time, I had volunteered at several different shelters depending on where I was living while I earned my degree. I had two dogs at  home to keep me busy, but my heart was not full without having a place to volunteer. Volunteering at a shelter that has to make the tough calls and sometimes euthanize pets was never something I saw myself doing. I thought it would be too hard on me mentally and, again, I was aware of the stigma behind a facility such as this. Like Sunshine, I decided to give our local animal care and control facility the benefit of the doubt and signed up to be a volunteer. I opted to be a dog walker and transporter in an effort to keep heartache at an arm’s length. I’ve now been a volunteer at this shelter for nearly two years and I am so thankful for making the decision to do so because I probably wouldn’t be able to call myself a pitbull mom today without it.

As a dog walker, I encounter dogs of all shapes, sizes, ages, and personalities. I really enjoy being able to gather experience handling different pups, but over time, my favorites have become the members of our Ambassador Pitbull Program. The Ambassador Pitbull Program adopts out the stray and surrendered pitbulls of our community in to responsible, loving homes where they can thrive and receive the love and care they so deserve. The pups that are placed in this program are, more often than not, the easiest to “dress” with their harnesses and collars and the easiest to walk on a leash without being pulled around the facility and grounds. Some dogs really make me work for it when I’m just trying to help them to get outside to our play yard, but never a pitbull. We all have those days where we have been through the ringer and we just need to be. From time to time, those sort of days coincide with my normal volunteer day. When this happens, if it a pitbull is available to walk, they are my go to. This is not to say that other breeds are not also exceptional, because they are, but pitbulls have clearly become one of my favorites. 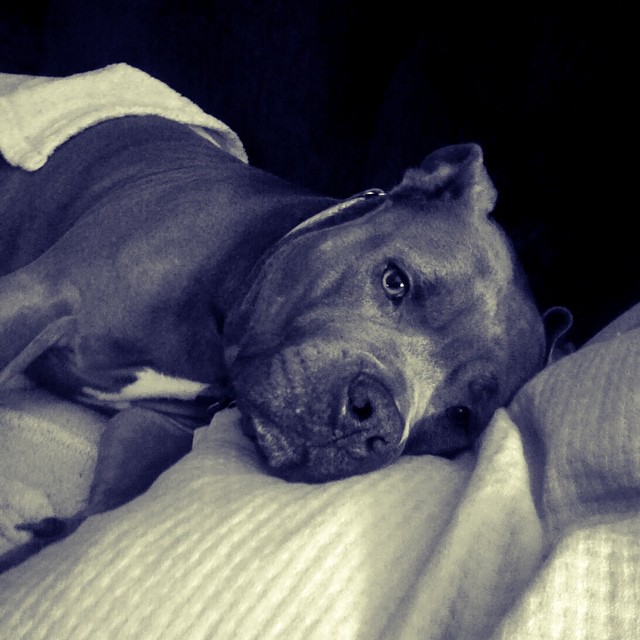 By this point in time, I had met my now fiancé and our pack had already grown from two to three dogs. We had a motley crew…a small spaniel mix, an Australian shepherd mix and a Treeing Walker Coonhound. I would come home from the shelter raving about different dogs who I had worked with that evening. My fiancé would just smile and nod. She likes dogs, but hasn’t earned her “crazy dog lady” status yet. The idea of adopting another dog after the third addition was never a serious one, just something I like to torture her with.

One day while scrolling through my Facebook feed, I came across a “death-row” dog who had somehow infiltrated my page. Unlike my sister, I chose not to follow these pages because it was just too heartbreaking. Still, I couldn’t get his face out of my head and I knew his time left was short. I figured that since it worked out with Sunshine, it could work out for us too, right? It was an impulse decision, but I began filling out applications, contacting rescues, arranged a home-check…all in time to find out that someone else had beat us to him and he was safe. Relief and disappointment came over me all at once. It was also in that moment that I started paying even closer attention to the pitbulls in our Ambassador program. It wasn’t but a month or so later that a beautiful blue nose pitbull had come to the adoption floor and our adoption website. I just had to see him. When I arrived at the shelter that week, he was already being walked by another volunteer, but she let me take over when I started gushing over just how handsome he was. He had a huge noggin and was just a really well-mannered fellow. He moseyed along during our walk and was just aloof to most other sights and sounds. That night, I started begging my fiancé to go see him.

She didn’t want to take on another dog, especially another big dog, but because I wouldn’t stop nagging, she went and saw him anyway. As soon as she saw him, she was in love. That was it! We started working on getting all of our vet records in order, we changed our rental insurance to cover him since our previous insurance group had breed restrictions and we waited anxiously to see how the dog-to-dog interactions would go. Summitt, our spaniel mix, is notorious for being a diva. I went through three different dog-to-dog interactions with her before we landed on Cory, our Australian shepherd mix, as her new brother (pre Sadie and Gus). She did give Gus a little attitude when they first met, but he was respectful of her sassiness and let her be. The other two were more interested in the smells and sounds of the shelter than their potential new brother. Long story short, Gustafson Blue Padget became part of our family on June 26th.

Since bringing Gus home, we’ve been mostly met with positive responses and compliments of just how handsome he is. The first time someone responded negatively towards him felt like a punch in the gut. I knew it would catch up to us eventually, but I didn’t expect it to feel the way it did. We were at a park with Gus and Sadie, our hound, when Sadie and I were approached by a mother and young girl. They said that they had beagles at home and wanted to pet Sadie because she reminded them of their dogs. We spoke briefly, Sadie got some love and they were on their way. As they walked away, my fiancé was returning from the car with Gus. I watched as the young girl pulled her mother towards Gus. Her mother pulled her away. When my fiancé returned to where Sadie and I were waiting, I asked what that was all about and she said the young girl’s mother said, “no, not that dog, honey”, when she asked to pet him. It was heartbreaking.

Regardless of situations like that, Gus has brought us nothing but joy. He is my fiance’s dog through and through. Many of you long-time dog owners will understand what I mean when I say that there is always that one dog that just seems to get you and will always hold a special place in your heart. For my fiancé, Gus is that dog. Because of him, Sunshine and the dogs in the Ambassador Pitbull Program, I will forever be an advocate for the breed. Gus slobbers when begging like Sadie, he enjoys rough-housing and playing with toys like Summitt and likes to be lazy and snuggle like Cory. He may be a pitbull, but he is not a monster. He is just a dog. Our dog.

Edited!  Gus and his crew DO have an instagram page, so go follow them and get that smooshie faced-goodess in your phone! At the present, Gus does not have a Facebook page, but feel free to mention in the comments how moving this story was to you. It certainly was to me! (DL)

4 thoughts on “The Bully Collective-Gus’s Story”