There were a huge number of things influencing my decision to order or not order my very own Yellow Brick Home Pet Shop Portrait. One thing is that I can be super picky and super critical, especially if I order a custom piece. I mean, I’m still upset about a special order cake from three and a half years ago and chances are I will come unglued if I have to tell that story again. The other reason I hesitated is that I knew that Kim asks questions about the pets she is about to paint. What if I didn’t do justice to the boys? How could I begin to put into words the communication that bounces between me and Ray with just a look? How do I describe Julius’s earnestness and sweetness? What if the portrait looks like two dogs that kind of look like Ray and Julius but without the soul that reflects in their eyes? What if I fail them by the limitations of my vocabulary and expression?

Well, to address the first issue, after being such an avid reader of the YBH blog I know that if there’s anyone who is freakishly attentive to the details (in the best possible way!) it is Kim, so the only roadblock would be me. Because the Fort Wayne Pit Bull Coalition was selected to be the YBH rescue partner for the quarter I would be pretty ungrateful to not place an order. I’ve been debating on what size to order do I order singles? Do I order a joint portrait? Do I order two singles and a double? Ack! Finally I figured out what to do, so I took a deep breath, clicked, and just like the description of what happens, I soon received an email from Kim asking all kinds of questions. While I gathered up pictures and stewed over what to write about the boys, I realized that probably most YBH Pet Shop customers are just as obsessed with their pets as I am, so she could take my intensity with a grain of salt, right? I also tried not to flood her inbox with pictures-oh just one more, because this one is just so cuuuute!

Nearly Every blog I’ve ever read about the YBH experience talks about how great Kim is to work with and I don’t think I can find the right superlative to describe how great Kim is to work with. I mean, the process is so clearly defined and the communication is so good and crisp. (Have I mentioned how picky I am?) Once we decided on the “pose” she got to work on a mock up to email me so there were really no surprises and no chance for any regrets (oh, I wish we would have done this rather than that) because once I saw the mock up, I was in anticipation heaven! I wanted to shout from the rooftops how cool this was going to be and yet I wanted to keep it as a huge reveal-y surprise too.

So in the first few emails Kim was brainstorming how she might do the painting of the boys. They’re both larger in person than they seem on a screen and she had an idea of using the blog heading or perhaps just their heads, but I know these knuckleheads and I know my own quirky self so here’s what I proposed. My Ray-Ray is such a good poser. If he knows it’s picture time, he usually sits or lies on his mat and gives me his picture face while waiting for his reward. 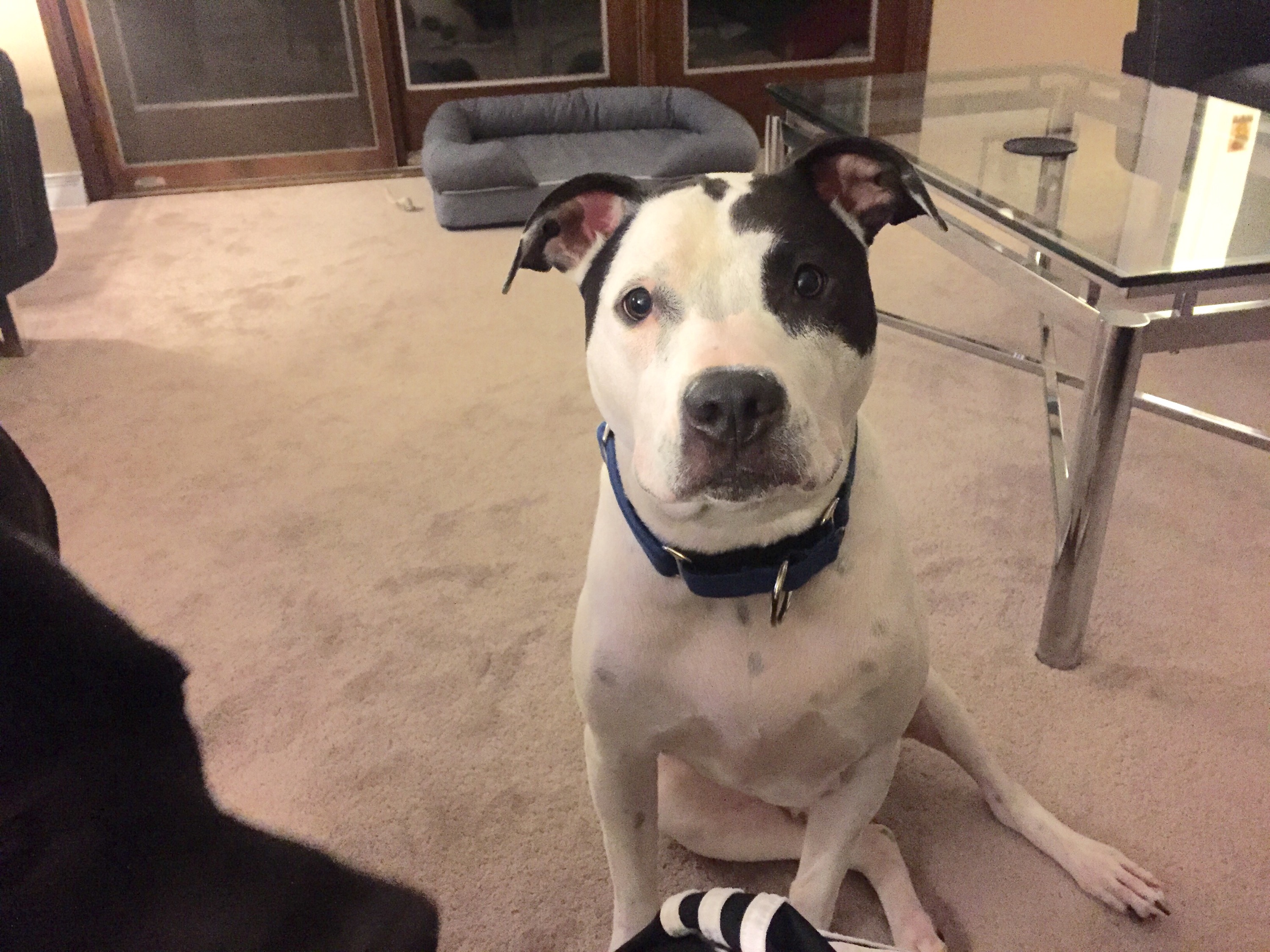 See that blob in the lower left corner? Juli-bomb.

Julius (who isn’t that treat motivated) acts like if he doesn’t get the posing treat he will absolutely shrivel up and die! He jumps, he grabs and he budges his big head into everyone’s space.

He’s a notorious photo-bomber, whether he tries to or not, so that’s what we did. I asked Kim to paint a picture of Ray in his normal pose and have Julius “photo-bomb the portrait.”

Once everything was set, I was given a target date and when it was complete, I received an email with a zip file (my choice as to whether I wanted to peek at it early) and I waited a whole 14 seconds before I unzipped that sucker and SWOONED! OH. MY. GAWD!

As awesome as the scan is, it still just doesn’t do justice to seeing this in real life. When I received my box (stamped YAY!) in the mail, I was happy dancing all over the house. You all should seriously just take a second and look at how freaking awesome this is. When I look at this-I don’t think I’m going to describe it correctly- I feel like Kim knows what it feels like when I wrap my arm around Ray’s neck and pet his chest. She painted what it feels like to hug Ray! Let me say it again: She. Painted. What it feels like. To hug Ray. It makes me cry to think about that. Her take on Julius? Spot on. He isn’t a huge dog and he doesn’t have one of those big American Bully heads but he just has such a big buffalo head that always seems to be in the way. She got his sweet simplicity and the open earnestness that is Julius. I ran all over the house placing it and finally decided on the dining room buffet for now.

It’s a very central room where I can see it all the time.  And let me just say, most of the guests we’ve had over have initially thought this was a photograph rather than a painting.  Yeah.

As I mentioned, The Fort Wayne Pit Bull Coalition is the rescue partner of Yellow Brick Home so for the remainder of this quarter, 10% of the proceeds from all orders will go to the Coalition. If you have been absolutely dying to have a portrait done of your fur kid(s) I would highly recommend you place your order with Kim as soon as possible but if you could do it  by September 30th the pit bulls of Fort Wayne would send you big, sloppy, wet, grateful kisses.

What are you waiting for?