I’ve sat staring at a blank screen now for hours because I’m not sure where to begin.  This story has many points from which to begin and it’s not yet completed so the opportunity to experience it while it unfolds presents itself. I’m excited to see how this story progresses and to discover the outcome along with you.

I guess the beginning for me started last week as one of our volunteers was at a shelter* and we were talking about some of the dogs they had available to be pulled.  One of the dogs was her “type” but she didn’t bring him back and since I had an occasion to be in that area a few days later, I just had to stop in to satisfy my curiosity about this guy.  The biggest surprise was that when I entered the front door, I was greeted by a Facebook friend who graciously led me on a tour of the facility where we looked at several sweet dogs in house.  At the end of the tour we were looking at a large board which listed all of the residents.  She pointed to a name, Tiny, an American Bulldog mix who was unlikely to leave the building.  He was heart worm positive and as if that wasn’t enough of a strike, he was deteriorating in the shelter and had seemingly lost hope.

Sad case, I thought but I generally advocate more for the highly adoptable dogs. If we can get as many of those as possible in homes it opens up that much more space for those who may need it and for those who may need more time.  Not until I arrived home and began scrolling through pictures of dogs available did I see Tiny’s beautiful mug.

My heart skipped a beat and I had to know more so I began messaging with my FB friend but as her replies to my query came through, my heart began to sink.  At intake he was a happy and wiggly big boy who acted like a puppy.  He was gentle and loving and good on leash but as the days stretched to weeks and weeks stretched to months he became “hard to handle” and began “losing it.”  Unfortunately I was already emotionally invested and ready to at least meet him.  Knowing there was a glimmer of hope, the Pit Bull Coalition agreed to pull him and give him some time to decompress before assessing him.  If  he passed assessment he would be treated for the heartworms but if he was too far gone…he would not be treated nor would he be returned.

I spent the weekend literally sick to my stomach.  With my daughter egging me on and pushing me out of my comfort zone to rescue a “hard case” the plans formulated and the pieces all began to fall into place, including gaining acceptance from the hubby and other Board members of the Coalition.  Now that the plan was set, what if when we arrived he was deranged and we had to leave him?  What if hs e crapped mountains in the van or what if he ripped up all of the upholstery? Could he be touched? Walked? Will he ride? Oh! all the questions that plagued my brain all night!

After messaging the time frame in which we expected to arrive, we made our way to the shelter full of anticipation and worry.  He was being bathed for us and as we arrived were told he was waiting.  When walking through the kennels, Kevin pointed at a dog and asked, “Is that him?” to which my first thought was that it couldn’t be.  We were meeting a potential monster, not this happy, tail wagging, calm boy but surprise! That was him!  He and I locked eyes and I believe he knew.  I had arrived with a collar, leash and harness in my hands and walked straight to his gate where he stood wagging his tail, ignoring the barking that swirled around him and he waited to be outfitted for his journey.

*If you would like to help support this shelter, message me and I’ll share the name/location, otherwise I’ll be keeping it anonymous to protect the sensitive nature of some of the details here.

There’s no denying that Lucky and Cujo were in fact two lucky dogs and oh my goodness, if a name was ever wrong for a dog, then Cujo was it. We began referring to him as Chance; he’d gotten several by now and yet The Blues still got other new names at the shelter. Ion (Lucky) and Iron (Cujo/Chance). I’ll admit, I really never called them by their new names much; Lucky and Chance they were in my mind and my heart. These two were definitely wiggling deeper into my heart, I mean, how can you carry a dog into a clinic, wear her blood on your shirt (like a badge of honor) and not feel like you are now somehow bound together? Can’t happen.

Lucky is about 10 months old and presumably Chance’s daughter. She’s a stocky little low rider who wiggles into you as if she’s trying to osmose into you to get that much more loves because she’s never met a stranger and is absolutely positive that all of humanity was set on this Earth specifically to love and dote on her. She’s probably right about that.

Soon after the weekend, the pair was sent to H.O.P.E. for their surgeries where Lucky’s lucky streak continued. There’s a fabulous woman (and friend) who loves Pit Bulls has been volunteering with the Fort Wayne Pit Bull Coalition by walking foster dogs at our Pack Walks and we’ve joked that she is a lucky charm because the last three dogs she walked were almost immediately adopted afterwards. She also works at H.O.P.E. and though she was at the June Pets for Life clinic volunteering, it was at H.O.P.E. where she re- met and fell in love with Lucky all over again prompting a Facebook campaign that had me in stitches and tears.

Ironically I had just recently had a text conversation with her partner about her level of readiness for a “large” dog and how all of their friends, especially all of us crazy committed pit bull people would be there to support them but understood the reluctance since they are newly settling into a new home.

The campaign started with this picture

and the caption, “This is Lucky/Ion/whatever I name her. I have absolutely fallen in love with her and need her sweet love in my life forever!”

Friends, ever supportive that we are began a very low pressure, reasonable show of support for Cassie’s campaign which became known as #freelucky.

Photo by Lisa Reyes and The Amazing Adventures of Clyde

Comments such as “Poster dog for PFL,” “Such a proud symbol of the PFL cause,” “If there was no Pets For Life in Fort Wayne, where would this girl be right now?” (Did I mention the other mom is the Pets for Life coordinator?) “#luckyneedstwomommies” and then there was, “Sarah McLaughlin called, she wants to perform at the #freelucky concert.”

Then the one that may have tipped the scale, “…I really do think it is time for me to devote my love to another dog. I miss Oscar and he would want me to love again….she just left to go back to ACSPCA and it made my heart hurt.”

Photo by Lizz (photobombing dog has already been adopted)

Ultimately,and in record time the campaign worked and Lucky’s fate rested in the paws of the two resident dachshunds. 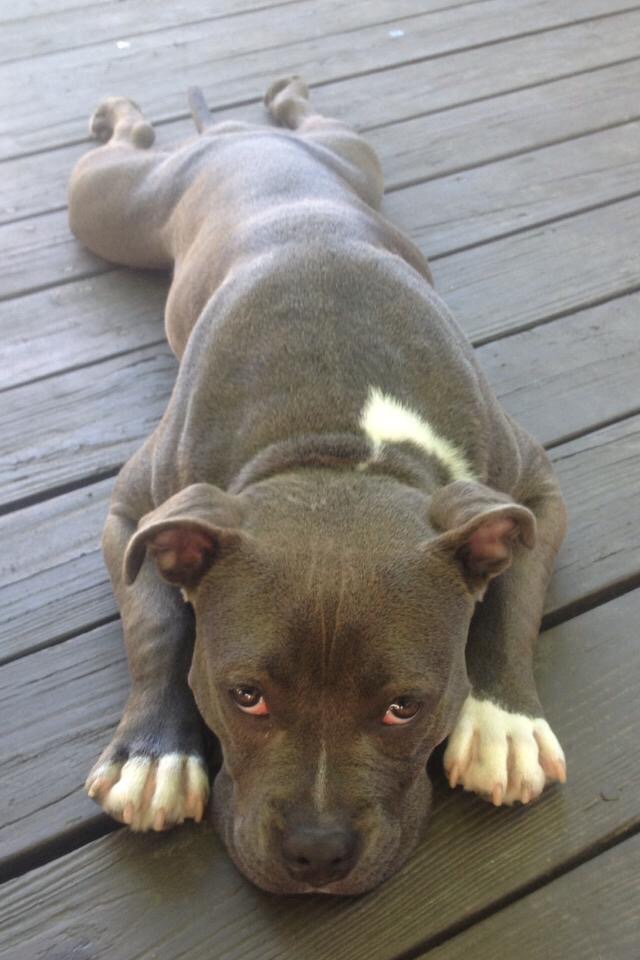 All kidding aside, how fitting that this Lucky dog found her way to these lucky women. This little dog, who in less than one year of being had been bounced from home to home, been protected at two shelters, become a rally symbol of community hope, a symbol of two women who are passionate about saving lives and giving back to their community and has made her final stop with them. I’m sure that when they look at their girl now named Eden, they don’t see a sad little story, but one of success and love written on one kissable, squishy face. #LoveForeverEden

For as long as I’ve been reading dog blogs I’ve been coveting something but just never seemed like the right time to order-until now.  For the third quarter of this year (July, August, September) the Fort Wayne Pit Bull Coalition will be the Rescue Partner recipient from Yellow Brick Home!  (and I swoon) 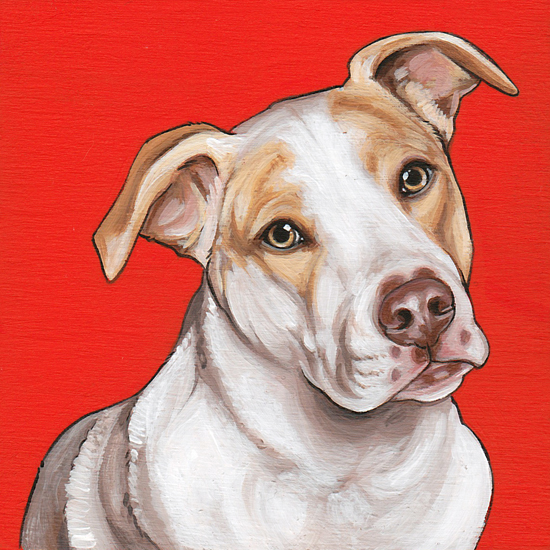 I have wanted a  painting/portrait done of the boys since before Julius even came along, but I was always just so wishy washy about it.  Also, I knew that working with Kim at Yellow Brick Home is an experience and I wasn’t sure I could do justice verbally to showcase my boys. In my mind I sift through pictures and pick out adjectives to describe the boys in order to help capture their essence.   I’m pretty sure I know how to have Julius done, but as ever Ray the Complex has me worried.  How will I ever begin to describe him?

Well I’m  sure to find out because not only is our Coalition  set to earn 10% from the purchases at Yellow Brick Home for the next quarter, but for the next three days you can shop and snag yourself a nice discount too!  Who wouldn’t want one!??

Just enter the code WELOVEFWPBC to receive 10% off everything in the petshop!  Wait!  What if you’re not exactly ready to order?  No problem, get a gift certificate (or two) and still reap the benefits. 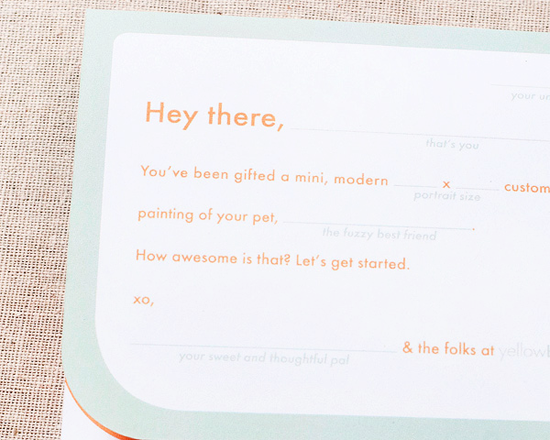 Who will you have immortalized in a mini portrait?