*Update: Bentley got adopted today.  5/6/15.  I won’t pretend  that while I’m happy that I might have had just the slightest twist to my heart when I got the news.

Sometimes the stories that mean the most are hardest to write; at least they seem harder to start. This one has been pinging around in my head for awhile and I keep trying and discarding the beginning, so maybe it will help if I just let it flow.

I’m wondering if this story is so hard to start because there are so many morals to it. Maybe it’s just not organized as well as I’d like it to be for the telling.

Some people shy away from adopting a shelter dog because they don’t know the dog’s history. In many cases, even if a dog winds up at the shelter because the owner surrendered it (rather than showing up as a stray) we don’t really know the history. We know the provided history only. I guess there are the people who have run out of resources and have to surrender and then there are those who just need to “get rid” of their pet. It can’t be easy and those people may or may not be aware that their words at surrender could possibly condemn your dog unfairly.

The first time I saw Bentley was in a picture that was sent to me on March 26th. 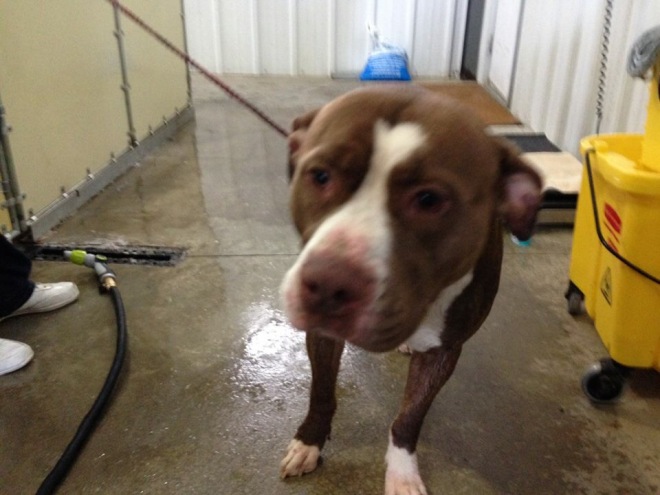 I had been an official Board member of the Fort Wayne Pit Bull Coalition for a whole five days when a Board member from a neighboring shelter contacted me about an abundance of Pit Bulls currently at their facility. We set a time to come and evaluate possible candidates for our rescue and I was the first to arrive so the Warden’s wife took me on a mini tour and I met the 6 pit bulls in house. Immediately Bentley grabbed my attention. In a large, clean pole barn stood two long banks of double kennels which could be partitioned off in case of a full house. Amid all of the barking and jumping on kennel doors, sat a large red lump with an impossibly large head. As we walked along the line, I was given a brief recap of the little bit of info available on each dog. The majority of the dogs were known by the number on their kennel and not given names, unless they arrived with one.

Bentley and Trina were the only Pit bulls with names. Trina had become the Warden’s wife’s favorite and then there was the large red lump named Bentley. Apparently Bentley was surrendered with nearly the equivalent of a death sentence: “He’s great with people and kids, but tries to kill other animals, including horses.”

When the rest of the team arrived, we began bringing the dogs out to the yard for assessment. The younger dogs, the under one crew were about as expected and pretty much all fun, all the time. The young adult females were also good but with a few slight health issues and all the while we struggled a bit to find a “neutral dog” for the tests. We tried Trina as the neutral dog and she soon showed that not only was she not neutral, but she might not be a very good candidate for …anything. She was returned to her kennel and not evaluated. Finally after all five were seen, the Warden’s wife, turned plaintive eyes to us and asked that we just look at Bentley. Just try.

Long story short, Bentley quickly became the star of the day and left us all wondering about his true past. He and two others were selected for the Coalition-when space became available-but should be left to the adoption floor in the meantime, just in case.

Days then weeks passed and the Coalition, always short of Fosters, did not have space and the Pit Bulls sat.

One month later, I received another message that the same shelter was full and needed some relief and this came at the same time that our own shelter was able to pull some dogs, though with the abundance of abandoned Pit bulls in our community, that type of dog as well as Chihuahuas and a few others was rarely “imported.” However, since Bentley had specially touched me, I was hopeful that he might be among the chosen to come to our shelter.

“What is the benefit of pulling dogs from one shelter just to put them in another one?” the Warden’s wife asked. The Allen County SPCA’s kennels are full of enrichment and some training for their temporary guests. Generally when walking through the kennels, one is greeted with soft music and otherwise silence. Dogs learn quickly that sitting quietly buys treats while jumping and barking brings nothing.

Bentley was pulled (have I mentioned how much I love that Executive Director of ours?) and quickly became a staff favorite as well as a garner of compliments from the Veterinarian’s office staff while visiting for his snip-snip.  Even on his first day at our shelter, I got the sense that he was happy to be there and he recognized his good fortune and saw his bright future.

Had we relied solely on the surrender information, and without a good word from the Warden’s wife, Bentley might not have been evaluated and certainly may have languished in the kennel until his space was needed. His big, sweet face haunted my mind, but had we not evaluated him, I might have let him go from my mind. Had he not shown himself to be a huge cinnamon sugar cookie of a dog, he might not have had a champion pulling for him. I don’t know.

What I do know is that despite whatever may or may not have happened in the past and because so many people stepped up and gave him a chance, Bentley’s future is bright.

But it takes a village.