I guess when someone declares it “Baby Week,” they should then post an entry each day that week.

So I had a big debate with myself and everyone else I knew who had a dog…do you prefer male or female dogs and why.  Obviously the what and why were as varied as the people I asked.  My issue with a male was really the “marking” and all other things associated with the red rocket.  I was pleasantly surprised to learn that neutering early can help with that, so the decision was becoming easier.  Easier to go with the first choice. 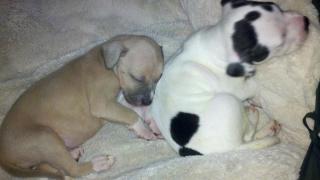 I thought it would be cool to foster at least two puppies with the idea of adopting one while getting the other ready for it’s forever home.  My husband didn’t think it would be fun at all.  Now looking back at those first baby weeks, I have to file that in the “what the hell were you thinking” bucket, although in the back of my mind I keep remembering everyone who says two are easier than one.

*Ok, so far no one has gotten the names of the four football players, so how about this:  if you are as skewed in the brain as I am, tell me why it would be tremendously droll to name these two Ray and Lola.  After all, we’re talking about $25 for your favorite Rescue or Shelter.