From Kindergarten through at least the 8th grade, I was the only Asian (half-Asian) in my entire school.  Not just in my class but in the entire school since my sister is younger and we never were in the same school at the same time.  I’m from a small town of only about ten thousand or so and to use a term I learned much later in life, “there wasn’t much color” there.  Not to say it was all one color save for me, but the other minority was represented with at least more than one which makes for some interesting school days.  I acquired a nice little nickname, Chinatown, which morphed into the even more wonderful, Chineetown.  Like probably every child, I hated being “different” and of course blamed my mother for not being white and for not speaking English clearly enough, never mind all that she went through to get where she was.  Once I got older I blamed her for not making me Korean enough, since we can’t speak Korean at all other than possibly counting to ten.  People see what they want to see and hear what they want to hear, though. 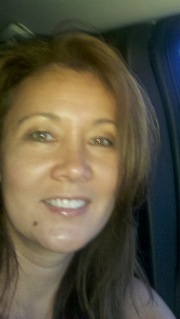 When I was in college and working at the front desk in my dorm my senior year, a lady who was visiting someone stopped and asked me if I was Korean and did I know so-and-so who was also Korean…at a university of nearly twenty thousand…and wasn’t I just so cute, because I still had an accent!

Later in life, I’ve not dealt with being too Korean or not Korean enough because there is always something else out there.  I recall my first husband and myself being followed through a department store as we wheeled our daughter in her stroller.  We were clean, well dressed, educated (ok you can’t see that), why were we being followed?  Oh yes, he was black and unfortunately he was used to it, although at first I didn’t even know what was going on.

Being different or being not of the mainstream, I don’t mean to compare life experiences of racial prejudice with dog ownership but I do find similarities.  People ask me if Ray is a fighter.  “When is your dog’s next fight?”  People have asked me, upon entering my yard if he will eat them. People think its a joke, that it is ok to say things like that because they’re just kidding. Why are you being so sensitive?

Then there are those who go out of their way to be accepting that they really are unwittingly adding fuel to the fire.  I’m constantly asked what kind of dog Ray is and try to always respond with “Pit bull type” though sometimes it is just “Pit Bull” that comes out of my mouth.  Naturally we get a variety of reactions and comments and one was, ” Oh, we just prefer to call them Terriers.”

I understand the good intentions behind that, but really it doesn’t help.  I hate that there is the feeling or sentiment that Pit Bull is something dirty that should be swept under the rug like a secret.  I feel badly that people are forced to list their dog as something it’s not at the Vet’s office for fear of BSL.  I’m proud of my boy, not because he is a symbol but because he is my loving “little” puppy.  I’m proud of myself because I’ve learned to be comfortable in my own skin (usually) and surround myself with great people. 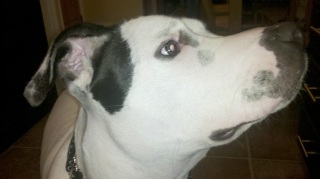 What do you think the results were?

One thought on “Eye of the Beholder”