I wouldn’t even call it a lump so much as maybe a growth, but it started out looking like a bug bite or a pimple it was so small.  It was small and red like a bite and nearly flat.  The problem is that it grew daily until it looked like…not a bite anymore.

I took Ray in to the vet a couple of weeks ago and we decided that if it grew significantly we would schedule the removal.  In that time it got to be about the lenght of my pinky fingernail, so I went ahead and made his appointment for this past Friday.  A day and a half before the surery, I was to begin giving him some Benadryl because if this ended up being a Mast Cell Tumor, those sometimes release histamines into the body when removed.  The Benadryl would be a precaution that wouldn’t hurt him if not needed.  How do you give a puppy Benadryl caplets? 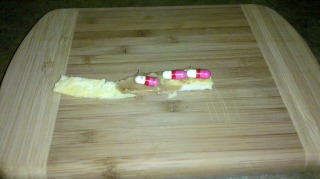 On a scrambled egg and peanut butter sushi roll up, of course!  These were the small capsules, 25 mg each, but you’d have thought it was the best treat ever. I guess if you’re Ray-Ray, it was. 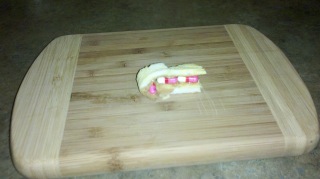 As Ray told you yesterday, he did really well in the Vet’s office and we were happy that it was our favorite doc there to receive him and do the procedure.  She is young and patient and a Pit Bull type dog, owner who just thinks Ray is the cutest thing.  Love!

I dropped him off at about 8:45 and by 11:00 they were done and called to let me know that everything went well and that I could pick him up between 3:00 and 5:00.  When I got there, our poor little boy was still pretty disoriented and seemingly sore.  He stood quite a bit at home as if he didn’t want to lie down or lean on that leg.  And he whimpered.  A lot.  It was pretty heartbreaking to hear.  He also spent the first hour at home glaring at me through foggy eyes since I was the one to leave him alone at the doctor’s office. 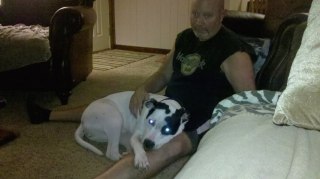 When finally I’d gotten the point, he came and spent the next 8 hours or so on my lap and we slept on the sofa together until all of his fidgeting made me feel he’d be happier with the whole sofa so I went to bed.
Saturday morning, we woke up and was back to his old self.  I had a hard time getting him to take his pain meds on Friday, but after various combinations, hit on the perfect solution.  One of Ray’s absolute favorite snacks is sugar snap peas and they just happen to be the perfect pill pocket as well.﻿

.
Just slit them open, insert a pill and “glue” it back together with peanut butter.  Yumcious!  ﻿

So it will be a few days before we actually get the Histopathology report and we are hoping for just a benign growth.  I’ll let you know how it turns out.

In the meantime, Ray has been mostly leaving his stitches alone and has avoided the dreaded Cone of Shame.

Thanks to everyone who sent their good vibes and please continue to do so while we await the test results.

Leave a Reply to Emily @ Our Waldo Bungie Cancel reply