Happy New Year, everyone!  We’ve been fairly scarce on the interwebs* because I’ve been as sick as a …well you know…for the past several days.  I don’t think Ray has minded it much because it meant a lot of nursing Mom back to health  laying on Mom’s chest and cuddling on the sofa. 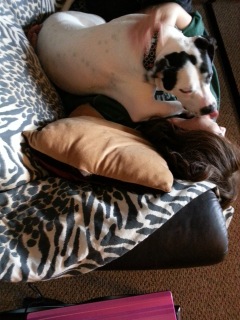 We’ve done a whole heap of sleeping this week punctuated with some serious rerun watching on television.  Have you ever noticed that there are some shows that you rarely watch but it seems like every time you flip in on you’re watching the same episode over and over again?  We found that to be true yesterday so we decided to scroll through the dvr list for a fresher rerun to watch.  Movie maybe?  Comedy, no.  Sports documentary, no.  War movie, no.  Musical, no.  It was looking like we were out of options when I found an old PBS recording of The Dogs are Alright that I hadn’t watched in ages.

While Ray is at home during the day we sometimes turn the TV on for “company” for him.  Usually it varies between Nick jr and classical music and he has a recording of Marmaduke that we sometimes turn on for him but I’ve never seen him very interested in the little talky box that sits on a stand.  Until last night.  I was watching this episode and Ray was standing by the door wanting to go out for the bazillionth time last night when all of a sudden his ears perked up and he rushed to the TV and started watching…
﻿﻿

Although I didn’t catch it with my camera, these were followed by a play bow at the TV!  I’m not sure if it was just that the dogs on TV were “speaking Ray’s language” or if those charming good looks captured his attention, but Ray loved watching that show.

All in all, it was very cute and rather touching to see.  (And yes, Kevin, he got down right away) I find it ironic that I first watched this show and started following the Vick dogs and BAD RAP etc way before adopting Ray and I was actually looking for a brown or black dog.  One  that looked more like Hector and Handsome Dan or Cherry and Audie…definitely not one that looked like that funny little  Jonny Justice!  Ah, karma…you got me again.

*I did want to send a huge thank you to our friend, Ann, of  Pawsitively Pets for adding us to her Top 10 coolest pets with blogs of 2012.  We are honored and Ray is so flattered that is already big anvil head might not fit through the door anymore.

11 thoughts on “Checking in from the Sofa”