﻿ That’s right, just in time for award season and the red carpet, Ray-Ray is in Haute Couture.  Who is he wearing, you ask?  Oh, just a custom made sweater by Tiennot Knits.  It’s what all the best dressed pooches are wearing this season, especially ones celebrating their team winning the Super Bowl.

To tell you the truth, I debate on ordering this since the first moment I read about Tiennot Knits Sweaters.  Of course I wanted one for Ray because I want him to have everything but he’s always been a little iffy about clothing.  He’s had a couple of knit sweaters but always did better with fleece and t-shirts.  I certainly didn’t want to order a custom sweater just to keep it in the hall closet.  I needn’t have worried, though.  That’s what is great about custom. I wanted to make sure it was not too long and just tight enough to be snuggly.

﻿
The funniest thing, though, Kevin was home when the package arrived and left it on the table, so when I got home I opened it and ooohed and ahhed over the sweater then set it back on the table.  Ray, however, knew it was for him (you’d think he gets lots of packages or something) and kept whining and nosing at the table ﻿till I finally put it on him and took him outside. 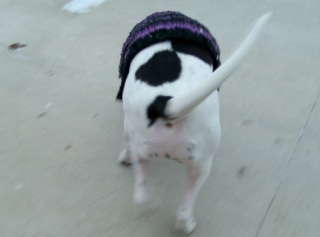 He was pretty proud of his new look.