Hi folks!  Ray and I apologize for our extended period away; it’s been a rough few days starting with last Friday.  As I mentioned here, I did end up needing to get my wedding rings cut off my finger. 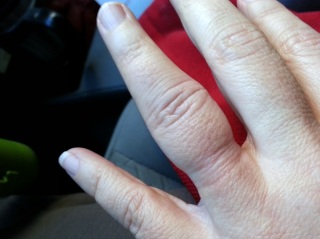 I gained some weight and my rings wouldn’t come off but then I cracked my finger and the knuckle swelled up.  A lot.  Just when I thought maybe I could just get by, I messed up my finger again and was in so much pain that I had the rings cut off Friday after work.

We’ve also been dealing with my husband’s father and some health and well being issues associated with the elderly.  I won’t go into details but we’re going to need some strength in the upcoming weeks/months.

Then we had a sick, feverish baby who didn’t sleep much Sunday night, daycare who didn’t mention that Asia needed to bring more milk…until she was dropping off the baby and since the fever was back, I just dropped off the milk and picked up the baby. 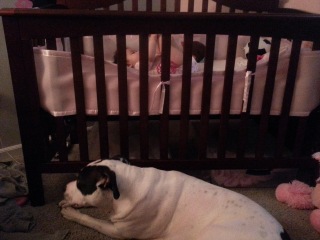 Ray and I ended up babysitting and I have to say, that Ray is becoming quite the responsible young man.  We’ve kept the intros extremely brief for a very long time since Ray was such an exuberant puppy.  Ray still doesn’t have free run of the house and actually when I took this picture on Monday, this was the first time he was allowed in the nursery.  The baby luuurves herself some Ray-Ray (who doesn’t?) and Ray loves the baby, but we do keep it brief and calm.

We’ve got a couple of adoption/outreach events coming up this week as well.  Tonks will be at greenDogGoods Friday afternoon hoping to make a love connection and I will be helping at a St. Patrick’s Day event on Sunday with an adoptable pooch.

Thanks for bearing with us.  We do try to update Ray’s Facebook page as well, though in addition to the other issues, my phone isn’t most cooperative of instruments.
Peace.