Back in February, our shelter director, Jessica, made a visit to Ohio State University Vet Medical Center with one of the shelter dogs, Aerie.  Aerie is a young black lab who has hip dysplasia and she was being looked at by the experts to determine whether or not she would need surgery.  Being the Pit Bull geek that I am, I knew that Gremlin was going to be at the same facility that day, so I texted Jessica to see if she could meet them.  I’m being very cool about it all now, but on that day I was hopping around the office, totally squeeing over every text.  Jessica was planning to snap a picture of Gremlin, but unfortunately our crew was done and left before Gremlin was finished.  Jessica did send me a picture of herself with Chris Hughes, Gremlin’s dad,  as an awesome consolation.  He also mentioned to her that they were coming to Indiana for an appearance this Spring.

I recently found out that Gremlin was indeed coming to Indiana and this visit was to be her last before she retired from public appearances.  She was going to be the featured guest at Parade A Bull which is hosted by the Humane Society for Hamilton County.  In the back of my mind I knew I wanted to attend, but the event was two hours away from my house and Ray, still being a youngster, hasn’t been to many events and certainly not one of this scale.  I really, really didn’t want to drive two hours each way just for him to do his famous leash eating tug of war routine in front of two hundred Pit Bull owners and fans.  The thing is, though, if we didn’t try, I’d never know, right?

The event was held at The Monon Center in Carmel which had beautiful walking paths, a pond, ducks and a great resource center.  We got there just in time for the parade which was essentially a pack walk for solidarity.  I’ve got to tell you, folks, it was so moving to see that many responsible dog lovers in one place.  That many Pit Bull advocates and others who were interested in learning more about the group of dogs labled as Pit Bulls.

We were hoping to be able to at least catch a glimpse of Gremlin and The Stig (as well as their parents) but got even more than that!  At the first turn, look who we found! 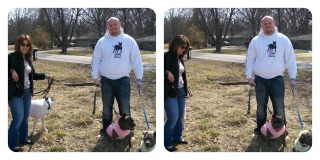 Gremlin’s mom graciously offered to take our picture while we chatted a bit and made the Ohio State connection.  It turns out they are getting married later this year and the pooches are going to be a part of the wedding party, so they were very excited to see Ray wearing a bow tie and I was happy to be able to refer them to both Sirius Republic (Ray was wearing his monsters collar and blue bow tie which we got a ton of compliments on) and also to Little Bow Pup who makes amazing bows and collar flowers and has really, really good customer service.

Stop by tomorrow to see more pics of the great Parade-a-Bull event.

2 thoughts on “Parade With the Stars”