Although there are an abundance of Pit Bull types of dogs in my area, there are not a lot of them for adoption.  The place that I don’t  volunteer with has some pretty stringent rules about the adoption options of Pit Bull types and while they do have some for adoption, it pisses me off bothers me that a dog like Ray-Ray might not even make it to the adoption floor based solely on his age. At SPCA there isn’t a ban on adopting Pit bull types, but until recently it wasn’t done and there still are a lot of “boxer mixes” and “terrier mixes” and before King came along the AmStaffs, etc were few and far between.  Sometimes it feels like there are rescues, there are “all breed” rescues and there are Pit bull rescues- but that is just an impression and not based on anything but the voices in my head.   Times, they are a changin’ but change comes slow.

Last year Ray and I attended the first annual Pits in the Park,which was truly a labor of love by the folks in the Fort Wayne PitBull Coalition, and we plan to attend again this year but really, stepping out of our truck to see this many responsible Pit bull owners/lovers was kind of overwhelming.

It’s a good thing I was wearing sunglasses, because I will admit to tearing up a little at such a sight.  Not only were there an incredible amount of beautiful Pit Bull types, but I saw a poodle or two, a Westie, two Saint Bernards, some Beagles and other non Pit bull dogs all there to join in this wonderful walk for solidarity. 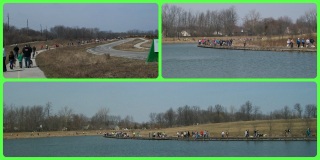 There’s a photo on Ray’s Facebook page by NZ Photography showing a group shot of the majority of walkers after the “parade.” Just go check them out and look at all of those beautiful Pit Bull types grouped together to celebrate themselves and their loving families.  Yeah, it was an emotional day, but a very good day.

I have to say, with Ray still being so young and somewhat socially awkward, I didn’t know if we’d be making the two hour drive just to sit in the car and watch the parade go by.  Lately (and I mean at least once every day) I marvel at how mature Ray is becoming.  At home he is AWE.SOME.  Out and about he is usually really, really good.  In crowds?  Wasn’t sure but really wanted to give it a try and I’m glad I did.

I love that we were able to go and be a part of this and we really are looking forward to being there again next year.

What types of Pit Bull related activities do you participate in?