Recently, OhMyDog asked “what would your dog’s theme song be?” Because I tend to first react then over-think, that question kind of threw me. Ray would kind of be easy, because although this isn’t really a song, Ray’s theme would be Chris Farley singing “Fat guy in a little coat.” (Sorry, Ray-Ray.) Ray is large, but doesn’t know it and his life is full of silliness. He’s an 80 pound lap dog who is completely a Mama’s boy and I truly believe that in his mind, he is still the 6 pound puppy I carried home a year and a half ago. 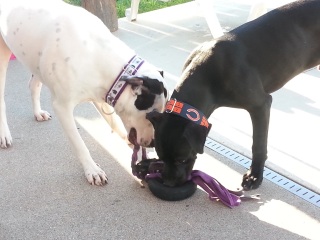 Julius was a little bit harder to figure out. He had a quality about him that I didn’t recognize at first. When I first met him, I knew Julius would be great for Ray and it turns out that I was right. He has helped Ray be less socially awkward and I can see that he will most likely be the leader between the two. As I was watching them play, that word that had been eluding me finally came to light. Julius is confident. Julius is the good-looking, confident guy that everyone wants to be friends with. He’s the quarterback on the winning team, the student body president. Julius can walk up to anyone knowing full well that he will be well received. Juli’s theme song is “I’m sexy and I know it.”

So we want to know: what is your dog’s theme song?