I cried at work yesterday. That is actually nothing new. I’m often emotional and when I read something that touches me, I well up. Yesterday a co-worker emailed me inquiring if I’d like to purchase some Greenies. She had some boxes of jumbo and large available because, she said, “I have several boxes of those sizes and the dog that used to eat them is here no longer. The 2 dogs that I have left are very small and they would burst trying to eat them!!!”

My friend/co-worker, who I spoke with last week said she lost two dogs within nine days and neither was sick so it was a total surprise. It was one of the worst weeks of her life and she said only a fellow dog lover would understand.

One of the families I met at the PetSmart adoption event, was in with their beautiful, gizzled dog. They had gone to several locations looking for some of the advertised dogs available but kept just missing the ones they sought. Their stately elderdog was ten years old and has cancer. He was well loved and a cherished part of the family who had been with them since being rescued nine years ago. This family was looking to add to their household, not replace an aging member of the family but to expand. 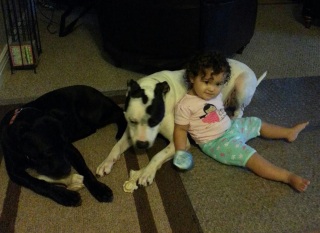 They say you shouldn’t outlive your kids, but we will all outlive many of our own furbabies. Each one will take a piece of our hearts with them. Asia and I were talking about Ray and Julius the other night. I never imagined that I would have two dogs, much less two who were so close in age. “Muffin,” the baby, arrived after Ray but will never remember life before Julius, she will always have the two. She will grow up with the boys, just as I did with Samantha and learn to love and properly care for animals. She will carry on the animal advocacy of her Mom and her YaYa and be a good steward for the next generation.