My Co-Pilot
Ray is my travelling dog. He and I have gone several places near and far without mishap and because Ray has always been such a good passenger that it’s been easy to forget that so many of my other transports have involved pukers and poopers. Yes, in my vehicle, a sturdy seat cover has been a necessity but lately with so much use, I’ve noticed it isn’t exactly waterproof anymore. The liner is pretty well cracked, and the flaps that Velcro open and shut around the seatbelts are potential leaky areas.

The big challenge in finding a reliable seat cover is that I drive a pick up so the back of the back seat is sort of stuck to the inside of the truck. Seat covers have to sit on top of the seat and can go over the head rests but can’t go over the back of the bench seat. While I mostly used the seat cover to keep Ray’s hair and possibly his muddy paws off of the seat, a good cover became critical when Julius joined the family.

He Tricked Me
The day I picked Smokey up and drove him home to his new life as Julius, he sat in the back seat fairly bewildered but enjoying a nice dried duck foot. He loaded in nicely and sat on the seat probably wondering what was happening to him. That was pretty much the only time he has been in the truck without vomiting. His next couple of rides were solo and I quickly learned the signs. First the strands of drool begin to form accompanied by a funk in the air. If I don’t pull over immediately, it would be too late. 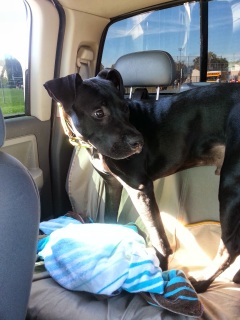 Big Brother
When I began letting the boys ride together, things were a bit better. Julius didn’t begin to show signs of sickness with every ride, but I was able to stop and walk him more as well. This past weekend, however we had two showings of the house in the same day, and we had two vomits as well. Unfortunately, both Ray and Juli were in the back and both times I was too late to get Julius out in time. By the time I stopped the vehicle and opened the back door, Ray was ready to escape from his barfy little brother and very ready to take up the shotgun seat. The look of horror on Ray’s face was just too priceless.

Another Cover
Fortunately, I’ve been throwing extra beach towels in the truck with us, so very little has soaked through our cover, but I knew we’d need something extra. The solution I came up with is that I bought a twin sized mattress cover and cut holes out to go over the head rests. That way it doesn’t have extra fabric in the back and I can tuck it nicely all the way around the seat. It’s also water/liquid repellent. The drawback is that it’s white and ugly but I put my old cover on top of it for now until I can think of something else.

What are your travelling arrangements?