As we continue nesting, we had a big adjustment to make in regards to heating. Our former home had radiant ceiling heat and therefore, no vents and ductwork. Since we now have a furnace and our new home had been vacant then redone, we decided it would be prudent to have the furnace and all of the ductwork cleaned. 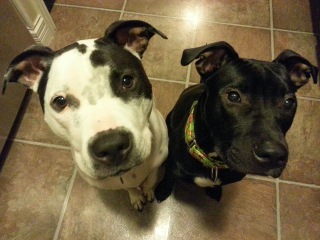 Anyhow, the worker showed up recently to clean the ducts and as is Kevin’s nature, he began finding out all there is to know about this person, namely not only was he a dog lover, he adopts and his wife wants to foster. As a result, Kevin called me to say his new friend adopted a Pit bull type from the shelter a couple of months ago. I said I would have to have met her, because I knew all of the pit bulls that came through there in the last year. Haley, he said her name was, a brindle girl. The only pit bull that was there around August was Rapunzel, who I was walking when I met Julius. “Are you sure they didn’t adopt from ACC,” I asked Kevin?

No, he said she was transferred from ACC to SPCA and that’s where they adopted her from. This sent me back to my photos in my phone. What Pit bulls would I have been walking around that time? Why couldn’t I remember Haley?

I sent Kevin a picture of Rapunzel and got a message back. “That’s her. She was called Rapunzel in the shelter, they call her Haley now.”