The first week or so that Julius came to live with us, the boys were completely separated so feeding was just another facet of that. Julius was ravenous and scarfed down his food so that I started very early on giving him food puzzles and creating obstacles in his bowl that he had to eat around in an effort to slow him down. His first vet check showed that he wasn’t by any means skinny, so I’m just assuming that while he had sufficient food, I suspect it was not delivered on a regular basis.

Once Ju-Ju moved into the mainstream of life with us, I continued to feed him in his crate with the door open, but made sure to hover between the two boys. Ray had always been a grazer and I constantly was looking for tasty toppers to enhance his kibble so that he would finish his meals in one sitting. With work schedules, it wasn’t feasible to feed him more than twice a day and Kongs generally went untouched if he was alone. He seemed to have to be with someone (usually me) if he was eating a meal. 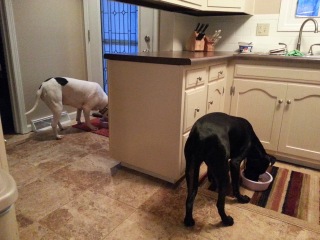 As the weeks progressed, the boys’ eating habits began to even out. Julius was taking more time, savoring his kibble, if you will, and Ray was finishing his meals quickly and without the aid of additional toppers, other than the teaspoonful of organic coconut oil they both received. They were both still fed in separate rooms as Ray eats in the kitchen and Juli still eats in his crate. One day I actually found Ray budging his big bully head into Juli’s crate to eat puppy kibble and Julius just sat nearby and allowed it. Needless to say, I stepped up the vigilance a bit, but all in all the boys seemed to be willing to share. Julius cleans up the floor near Ray’s bowl and Ray always inspects Julius’s area for left overs.

With the holidays and a new home, we ended up moving the crate yet again so Julius began receiving his meals around the corner in the dining room but not in his crate and since that went so well through most of December, I tried an experiment and fed them both in the kitchen, but on opposite sides of the cabinets. The only issue with that one was that Ray now eats faster than Julius, so I stay nearby to moderate, but in all actuality, this is the most gratifying thing I can think of. In my opinion, Julius is so confident that is food will come regularly twice a day that he no longer needs to inhale it. I feel like we’ve given him the gift of security and he has given us one even more valuable: trust.