There are some dates that you just don’t forget. Major holidays (except for Thanksgiving…what is the rule for that, again?) and birthdays of close relatives would be the first to come to mind. If you’re a CDM, Gotcha Day is often one of those dates as well.

To tell the truth, last year I was really looking forward to Ray’s Gotcha Day celebration and we did a nice Blog Hop to celebrate, but this year we kind of allowed it to go by the wayside. Obviously, I knew that it was sometime in January, but I had to go back to the blog archives to figure out the exact date. I could have counted it out on the calendar as well. It would be seven weeks after December 1 and then whatever the date of that Friday was.

December 1, 2011 was a Thursday and because I was present for Ray’s birth and had such a vested interest in his little family that is the day I celebrate. In my mind, other than for want of a few minor details, Ray’s day of birth IS his Gotcha day for me. He was always mine, in my mind and in my heart, so that only makes sense to me. 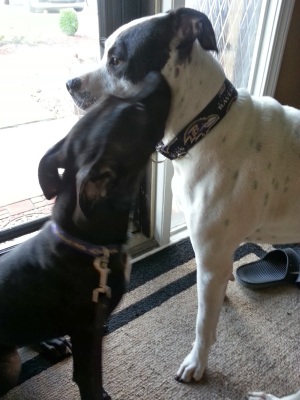 Julius, on the other hand, was probably born in February. The day in the last week of July that I picked that little ragamuffin off the street and took him to the vet, we got a guesstimated age of five to six months. At his next visit in August, I remember a different vet in that office estimating his age slightly differently, though I can’t remember exactly what the variance was. Because of that, I “decided” that Juli’s birthday would be February 1. I chose February because that would have been about six months roughly before and the first in honor of his brother’s birthday. That is now his official birthdate on his vet records. Who knows when we’ll actually celebrate? My guess is we may give it a nod sometime during the month, but for me, the day I picked Julius up and brought him to my house will probably be the official date we observe. Or maybe the day before that, which is when I had him vetted, or maybe the 30th, which is when I had him neutered. It might even be July 31 just because I have it in my head that that is his Gotcha Day.

So with all of that rambling in mind, I’d like to wish Ray a Happy not-really-Gotcha-because-you-were-born-to-be-mine-day.