About a month ago I was travelling between two offices and decided that this was the day I would stop in the shelter in the rural town that I was headed to. From the outside it was a disaster and upon leaving my car, I could hear the heartwrenching sounds of many, many dogs within. As I was standing there debating on whether or not to enter, a man pulled up in the municipal vehicle that designated him as a shelter employee and asked to help me. I explained that I volunteer at my local shelter and wondered if there was a need for volunteers here. A question eagerly answered that gave me the impression that volunteers were few and far between.

Since they were closing soon, I didn’t have the opportunity to enter, but as luck and scheduling turned out, I was able to visit today. I was greeted at the door by the Animal Warden, who had been apprised that I might show up one of these days, pit bull type puppy, a mastiff and a jack russell who were all wandering in the office area along with a few cats. The Warden and I chatted about my experience and their philosophy, their struggles and challenges. I asked if they ever allow or wanted other shelters to pull and was told that they are quite willing. 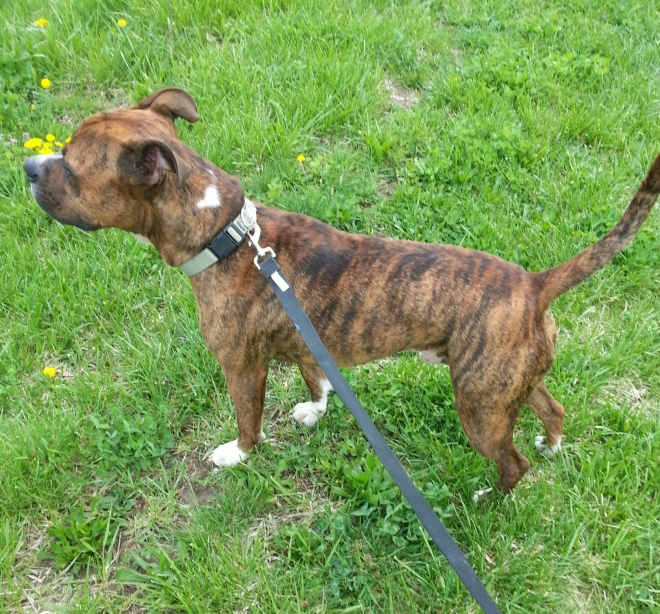 I was given a tour of the facility and headed out to walk a couple of dogs before needing to return to the office.

Naturally, I chose this fellow with a heart on his neck, but truth be told, I was actually quite pleased to see only three Pit Bull type dogs at this shelter. The mix of available dogs was varied which also was contrary to what I had imagined I would find.

I left with the Warden’s card and cell number and promised I’d give her a head’s up before my next visit, in case the stars align that we could pull some dogs!

6 thoughts on “Don’t Judge a Book”