I’ve known that PetSmart had BDL pretty much ever since I had Ray, so close to three years.  While I know it is wrong, I didn’t really give it too much thought for two reasons.  One, there isn’t a PetSmart doggy daycamp near us and even if there were, we wouldn’t use them.  We are so in love with the care, attention and socialization that Julius receives at Paw’s-n-Claw’s that we wouldn’t go anywhere else.  And two, it’s hard to get past the fact that PetSmart does a lot for homeless animals.  Even for homeless Bullies.

Proud to be a Pit Bull

There’s a huge push this week to urge PetSmart to rethink their policy to reflect a more open admission that is based on temperament and not on breed/looks. 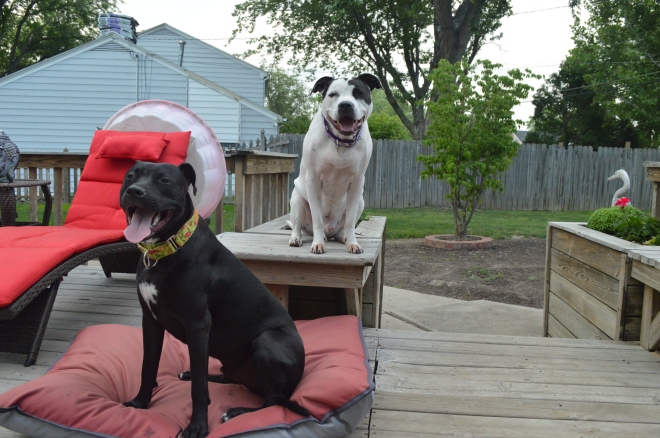 After all, people look at these two and think “they look the same to me,” but they are as individual as a fingerprint with their own personalities, likes, dislikes and behaviors.  Neither is better or worse than the other, but they are different.  A passive solution would be to boycott PetSmart but to be honest, I don’t shop there very often at all.  I’m there more often to participate in adoption events and there have been only two instances that I have not handled a “bully” at these events.  Would PetSmart notice if I discontinued shopping there?  Nope.  Will I continue to handle dogs at adoption events held at PetSmart?  Yep, however I won’t be spending money there nor am I asking you to boycott, that is a personal choice for everyone to make individually.  I am asking you to voice your concern if you believe that all dogs should be seen as individuals.

Discrimination is discrimination and whether you would take advantage of their day care, or Pet hotel  or not, I urge you to stand against this by posting your pictures to the PetSmart Facebook page with the hastags #SeparateIsNotEqual #WhyCantIPlay #EndBDL #PetSmart

13 thoughts on “In the Interest of Fairness”