The saga of Ray’s legs continues. As you may remember, last July after the Sugar family was adopted, Ray went in for his TTA surgery to help repair his ACL. Due to his high anxiety levels and my anxiety over his anxiety, I waited longer than I should have to schedule this surgery and going into it we knew that he had advanced levels of arthritis is both legs for a dog as young as he is. Fortunately the surgery was a success which was doubly confirmed in March when Ray went in for his annual vaccinations and exam.For a dog like Ray I’ve just learned to do a lot of this medical in one fell swoop. At annual exam time, Ray has a dental cleaning, is vaccinated, has his nails trimmed and this year had his leg x-rayed –all while he was anesthetized. This most certainly is not ideal. Who wants to have their dog anesthetized every year? Not this gal, but I also don’t want him thrashing around screaming and injuring himself or staff at all either. 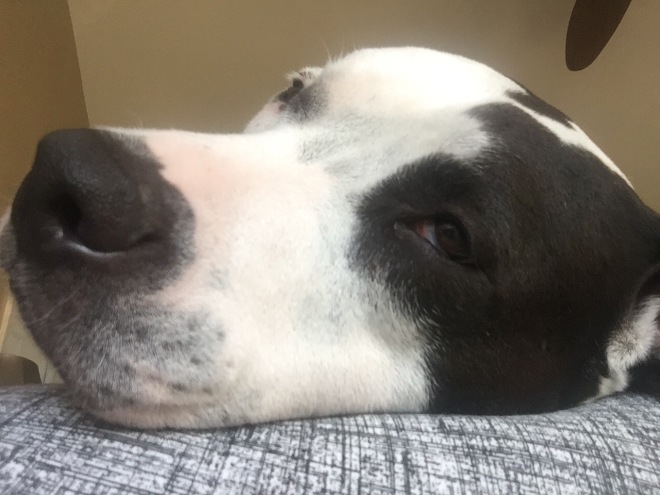 After Ray got the all clear in March we loosened the reigns a bit and allowed him to romp more around the yard. He’s pretty reasonable when trying to chase squirrels or Julius around the yard so we haven’t worried too much. Besides walking has really helped with not only strengthening his leg but with is overall mental happiness. A lot of what he does is he bounces about like a happy cow and pretends to chase Julius as Juli zips by only to stop and wait for the next pass.

Then about a week and a half ago, I let the boys out for their last potty break, and after a very short time heard the worst sound I could imagine coming from our back yard. For a split second my world stopped as it sounded like the boys were in an all out fight. Screaming and guttural growling filled the night air as I ran outside fearing the worst only to find that they had crossed either over or under the temporary fencing we had put up across the side (the whole yard has a privacy fence) where Kevin is trying to grow some grass-a temporary fence they had never before challenged-and were leaping at an opossum that was balanced atop the fence hissing at them. Julius and Ray were both leaping in the air with varying degrees of height (Juli can reach the top, so I’m thankful he didn’t this time) and screeching at this poor creature who finally departed to the neighbor’s yard. I got the boys back into the house and we all retired to bed after my heart finally stopped its frantic racing.

Sometime during the night Ray left the bed to lie on his mat and when we all got up in the morning, he did not want to get up for his morning potty break. I let Juli out and encouraged Ray to come when I finally saw that he wasn’t putting any weight at all on his leg and didn’t want to walk, so I helped him back to his mat, gave him some Rimadyl with his breakfast and left to help man the Pit Bull Coalition booth at Pet Expo. Ray has extraordinary holding powers so I knew he’d be alright until I returned, and he was. I helped him go outside in the afternoon, and kept him mostly immobile for the remainder of the weekend. He’s been relegated again to sleeping on his mat on the floor and had seemed to be healing just as we hoped. Until the following Friday. Last Friday I was sitting on the patio with the boys when Ray heard Kevin pull into the drive. We went inside to greet him after having been gone the week and all was normal yet again until about an hour or two later when Ray again wouldn’t put any weight on his foot.

Kevin and I have agonized over this since Friday. We hate to put him under just for x-rays again but in reality we can’t not do it because we need to know the extend of any damage, but do we subject him to another TTA? Do we try TPLO? How acutely does the arthritis factor into the equation? Can his pain be managed medically? Lots of questions right now and no answers…but he knows we’re talking about him.

One thought on “Ray’s Legs”