Life is pretty good for me now, but my Foster Mama says I’m in a “holding pattern” and that this isn’t actually my home, although it seems pretty darned good to me. It’s definitely better than where I was. This whole year has been full of changes for me and it took a long time before I felt like this place was going to work out. I was in “the shelter” and then I went to several different homes but kept getting returned just for being me and it was making me sad, but Foster Mama says I’m now at the Peaceabull place for a while and I can decompress, whatever that means.

I used to make lots of babies and because of that my back and my belly were sinking low to the ground and I also had wormys in my heart that made me feel tired all the time. Those things made me do what Mama says is my Eyore pose and it was how I was standing when she met me. The day we met, there were a lot of strange people around and I didn’t know what was going on, so I just stood with my head and my tail dripping from each end toward the ground like the branches on a weepy tree. I let the nice people pet me and lift my feet and look in my ears and other funny things and then I went back to the place from before-The Shelter. I didn’t really like it The Shelter because I got into a fight with a big dog and then everyone said I wasn’t a nice girl anymore and that I was going to be on “The List.”

But then a while later the nice lady who volunteers at The Shelter took me to the Vet and left me there and Foster Mama picked me up and brought me here to the Peaceabull place. I didn’t really know what was going on at first and I wanted to be with Foster Mama and Foster Daddy and I wanted to chase that mean fat cat and hang out with those handsome boy dogs who live behind the gate. I did sneak out and see that big handsome Julius but he just ignored me. I saw Ray too and the first time he made a mean face at me and made scary sounds but the second time he Woo-woo’ed at me like a cow. I don’t get to play with them but sometimes Mama took me to see Bentley. She says he is my Brother-Husband because I’m going to live with him some day but we won’t make babies together. I like Bentley because he licks my ears and one day he sent me a blankey to lie on that smelled like him. 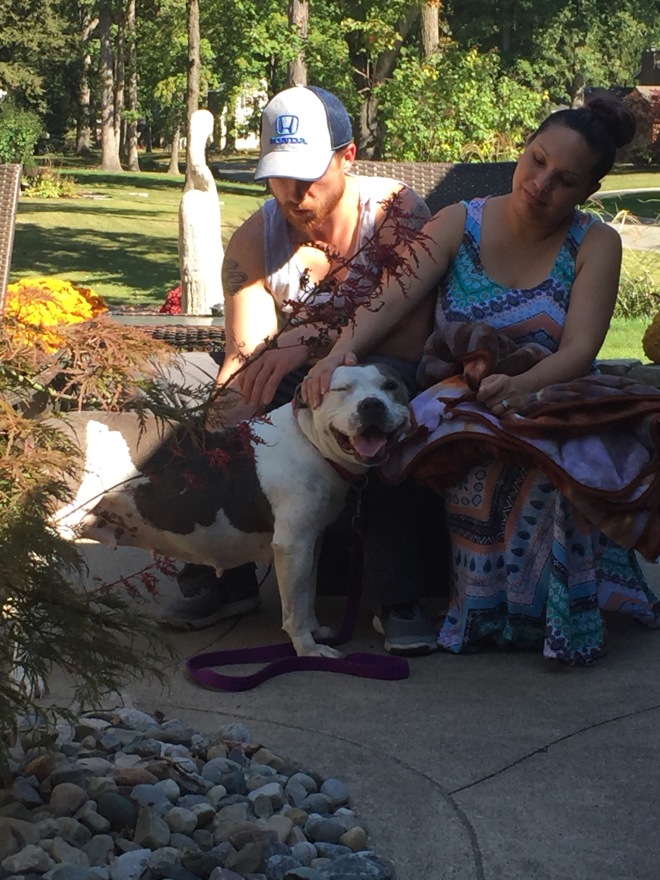 Bentley and I haven’t seen each other since before I went back to the doctor for more ‘jections. I didn’t like those. I had to spend the night and got a ‘jection each day and they hurt and made me feel sad and tired again. When I went back to the Peaceabull house I only wanted to sleep and sleep and sleep but after a few days I was starting to feel like my normal self again.

The whole time I’ve been here the really nice people have been coming to visit me each week. Foster Mama calls them “My Parents.” She says they’ve been waiting for all of the wormys to go away so that they can adopt me and take me to live with Bentley. They are so nice and I always know when they are coming. I sit and watch the street and when I see their car I get so happy because they bring me treats and give me lots of pets and one day they even brought me a brand new fluffy pink blanket. Brand new! I was so excited to have something of my very own that was so soft and cuddly that I immediately showed how much I loved it by beginning to shred it like I do with all my stuffies. I thought for a minute I was going to get in trouble but they just laughed and let me play. I sleep with that blankie every night. It means a lot to me because when I was homeless I didn’t have anything that belonged just to me. I had a hand me down collar and a rope for a leash.

I didn’t even have a name of my own, because on my paperwork I was called Princess 2. But foster Mama says that is all going to change. I have my own name and after something called One More Sleep, I’ll have my very own home.

One thought on “As Told by Bryn”