So much begins with Ray (this blog is a good example) and just like this blog, as life happens and change is as fluid as it is inevitable. When I began chronicling this little assembly, Ray was an infant and our kitties, especially Boo Kitty, were not too fond of him. My goal was to share our experiences and leave something of ourselves out there with the hope that maybe we’d help someone else who may be going through some of the same experiences. Little did I realize that sharing is not easy for someone as obsessively private as I am and ultimately I wondered if our daily lives had just become too routine? 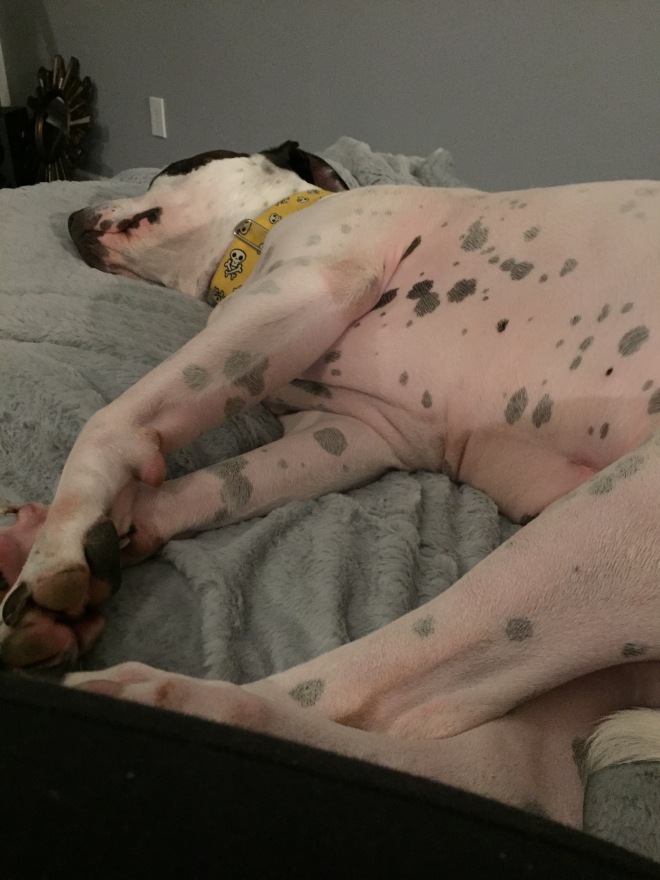 Once upon a time, my hope was that Ray would earn his Canine Good Citizen and be a great ambassador in the community. Sadly this was not in the cards for us as Ray likes his small world. He was definitely not well socialized early and try as I might as we took class after class he learned more “obedience ” but also became steadily more reactive. 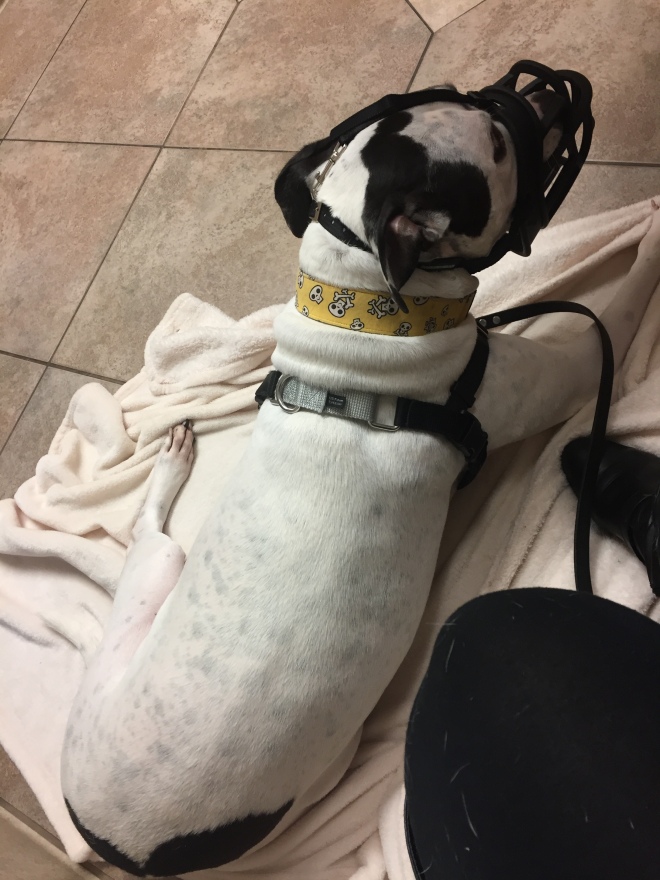 He’s also a “fool me once” kind of guy. He’ll walk into nearly any building but once that place turns out to be the place off surgeries and injections, the challenge was on to find new ways of coaxing him back through said doors.

A few years ago Ray underwent TTA surgery on his rear left leg. Knowing Ray has an aversion to nearly everything, we were sent home with our own staple removers so that he would be able to skip that visit. Night after night he’d fall asleep in my lap and I’d sneak another staple or two out of his leg until I was finally done and after months of restricted activity, his left leg became his good leg.

Fast forward to this year. Yeah, I should have had the right rear done sooner. It likely should have been done the following year but when you have a dog who has to be drugged to come to the office and anesthetized for vaccines and nail trims, you hold off. You hope it will heal, you lift him onto furniture, you guide him off of furniture and you invest in supplements as well as stock pain relievers.

But this year we noticed a more pronounced limp and at his annual checkup we had x rays taken and his leg was manipulated again. This time the result was that he hasn’t walked (much) on that leg since the summer and while we tried even more drugs the buck finally stopped and Ray-Ray underwent a three hour TPLO and luxating patella surgery to hopefully repair some pretty bad damage to his leg. 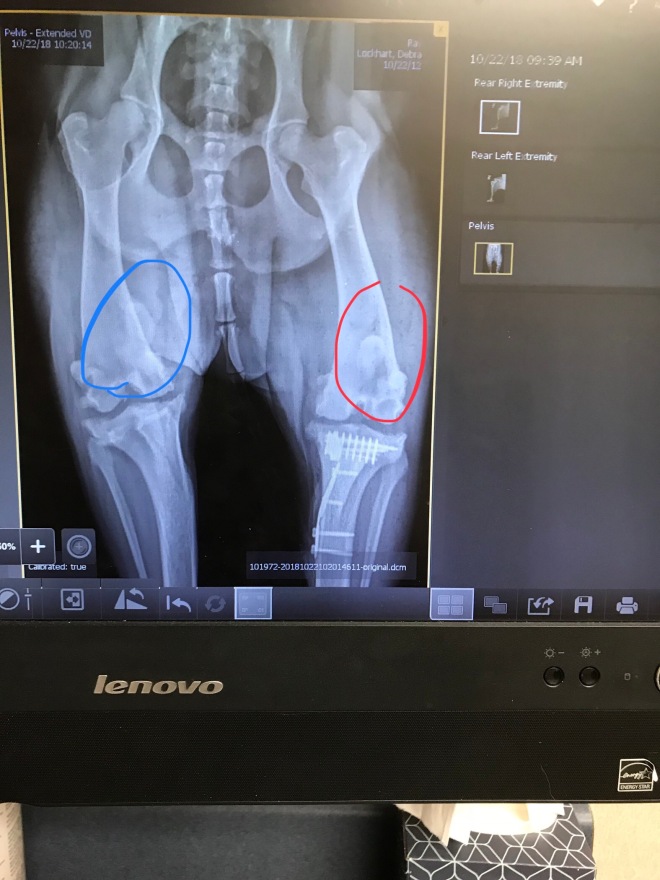 What does it take to heal the Ray-Ray, it even to try? Well a lot of help and a lot of understanding. Before our office visit (side note- I tried to schedule the consultation without him being there) I gave him three acepromazine and two composure pros and all that did was take some of the edge off. He was still upright, alert and walking but I did get his muzzle on without a struggle. The tech, with her eyes nearly buggingout of her head wondered why he was still upright. The answer, “ Because he’s Ray.”

The surgeon and tech were so patient and accommodating with us that we get to skip the 2 week check in. I just have to send a video of his walking progress and he’s getting dissolving stitches so no stress there. “Because he’s Ray.”

We do have to do the 8 week check with x rays and that will be another sedation but here’s to hoping all goes smoothly. At this point I’m just worried because Mr Ray has never slept anywhere but home since the day I brought him home. I wish I could curl up in the post op with him but I’ll wait. His little recovery room is all set up for him here and I’m counting the minutes till I can bring him back home.

I’m hopeful because our excellent surgeon is hopeful that this will definitely improve his mobility. He will never be a long home trail dog, but he never has been. Ray is our housedog in every sense. He likes his little world, he loves short and safe walks, he loves visitors and he loves his family. 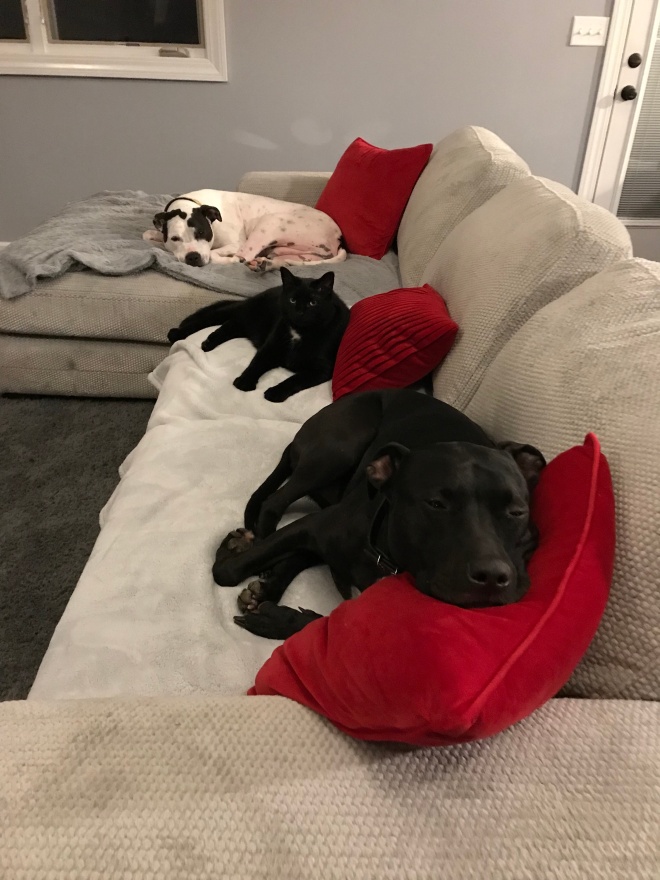 2 thoughts on “Life With Ray”