The feeding habits of the Mighty Pitbull have been fascinating to me because Ray is moderately-to-very food motivated depending on the time of day and the treat offered.  He’s been pretty excited at feeding time but other times  is able to relax and sit to be fed.  I’m sure this is partially due to his hunger level and mood.  Usually, he scarfs down a few mouthfuls and then sets to playing with his toys so I can feel confident that he isn’t starving in between feedings.  Since we have a limited amount of time to eat, especially in the mornings,  I do try to encourage him to finish expeditiously while not wolfing down his food and then horking it back up.  A delicate balance.  The other thing is that I have always made it a good practice to put my fingers in his dish quite a bit to discourage any tendencies towards food guarding.  While making sure he is open to that, we discovered a new quirk.  Ray prefers to be fed like this:

(And yes, he is on my lap, here.)﻿
I’ve also been experimenting with different types of food puzzles that are seemingly still age appropriate.  I want to stimulate his mind but not frustrate the puppy in him.  I have a kong which he manages occasionally, but I find more left inside than I would like to see and I tried a crinkit, but that doesn’t seem to work out as well.  Tonight he had just a smallish amount of food left so I put it in a clean Vitamin Water bottle and found some great success.  Ray loved it.  It was easy enough for him to figure out quickly, but hard enough that it took some work. 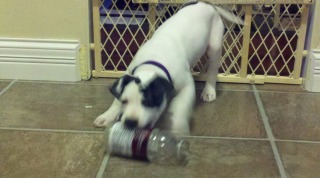 I think this one is a winner, at least until Smarty-pants conquers it. (Note, I did get the label off before it got eaten along with the kibble inside.)  This was a great way for him to get some exercise, eat without wolfing his food and stimulate his mind.
Do you use food puzzles and if so, what kind?
﻿