What a busy weekend!  Sometimes I think it is nice to be able to go to work just to have some time to settle down, although this week won’t be like that.  I know Ray was pretty well tired from all of the activity and slept like the baby he is.
Yesterday we had an open house so everyone but the kitties had to make themselves scarce for about three hours.  Kevin left early for work so he could visit his mom, Asia hung out with friends and Ray and I went to Eagle Marsh to walk and practice.
It was a perfect day, windy enough that Ray was a little out of his comfort zone with enough traffic sounds that we could practice being brave and focusing.  There were geese honking and birds chirping and so many things to sniff. 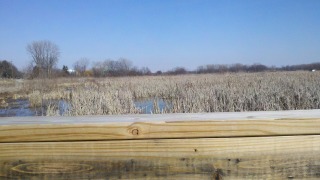 We did really well and even met a couple of ladies (one using a walker) walking their elderly dog.  They stopped for a few moments to chat and ask about Ray.  The elder lady mentioned that she once had a pitbull and that it was the biggest baby ever.  It’s refreshing to me how well received Ray has been everywhere we’ve gone, so far.  I’m sure the fact that he is so stinkin’ cute doesn’t hurt, either. 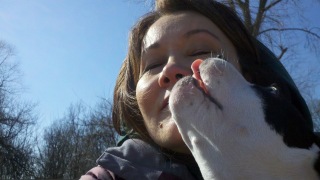 I had a pocketful of treats and was feeling pretty liberal with them but with some satisfaction noted that I didn’t get back to the truck empty-handed.  We had a couple of moments when Ray didn’t want to walk and I just kept hearing Jodi’s voice in my ear saying, “Don’t pick him up.”  Luring helped so much as well as my running dialogue so that Ray did fantastically!  There were even a few times when I was able to rely on some of our training to refocus Ray before he got out of hand when he seemed to need it.
I’m really hoping to make another visit back there soon as well as venture out on some other walking paths available in the area.  How was your weekend?