He might just be afraid that if he gets close to another dog his eyes will turn pemanantly into lasers.  Maybe he knows that unlike Jae, he can’t run as fast or jump the gate in a single bound as easily.  I don’t know exactly what his reasoning is but he tends to sit on the other side of the doggie gate and peak at the puppy.

Recently, however, we had all the gates down in preparation for an open house and Miko took that opportunity to sneak into the kitchen to make sure Ray’s water was the same as what the cats are given. 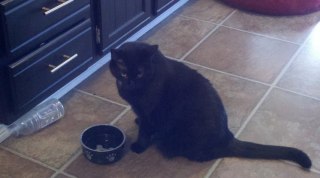 Here he is hoping no one sees him. 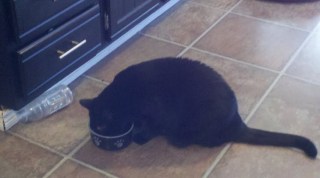 And here he is about to get his kitty card revoked.
We were really hoping that these two would get to be better friends.  At 19 pounds, Miko needs someone to run his butt up and down a little bit.  Time will tell, I’m sure.
﻿
﻿
﻿

One thought on “Feline Friday-Sneaky Miko”