Along with Ray’s monster physical growth, I love watching his mental growth.  As you might have picked up on from a post last week, we are back in class.  This is Puppy 2 which is only three sessions, but they seem to be some of the biggies.  The first one was waiting at an open door, settle/go to your mat, and DANGER recall.  Imagine my shock delight when Ray, after a two week hiatus from class was 95% well behaved.  It took a few minutes to focus after greeting his bud, Caymus but wow, what a difference two weeks made.

With a smaller class, we had more time to do practice repetitions and after just a couple of attempts, Ray understood what I wanted while at the open door.  A small blip which made me feel a little sad, is that he is a very “verbal” dog and grumped his displeasure at having to perform the task over and over.  The other participants said, “Did he just growl at her?”  Fortunately, the instructors explained that many Pit Bull types are “verbal” and that what you definitely don’t want is a silent dog.  You want a dog who can voice displeasure as a warning rather than one who may silently attack.  I know Ray’s sounds and this was not a growl but more of  a “Mom, I get it, now give me the treat.”
What I didn’t want to practice at class and somehow escaped doing so was loose leash walking.  We are still pretty miserable at it and mostly so in class.  Ray tends to get more frustrated at that time and spends a lot of energy tugging at his leash with his mouth.  Considering class went so well, I wanted to leave on a high note and not practice that exercise.  Part of why I wanted a dog, though, is for walks so on Friday evening, I did some deep breathing, loaded my pockets with treats and off we went to the River Greenway.

I wanted to set us both up for sucess, so I wanted this to be pretty low key.  A public place where we may encounter people but not crowed, a place he hadn’t been before and plenty of things to sniff as a reward.  Let me tell you, he did great!  There was so much to see and sniff, we didn’t use any treat lures at all and there was enough strange stuff that he looked to me for reassurance quite a bit and we even had loose leash for a large percentage of the time. 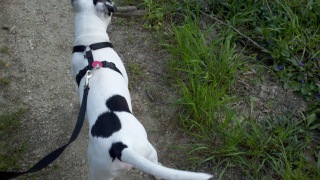 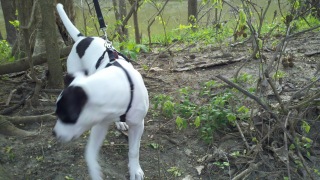 There were minimal human distractions but they were varied.  We encountered two boys on skateboards, two joggers and one cyclist.  The skateboards kind of freaked Ray out which was actually kind of nice because he kept close to me and loose leash was a given.  The joggers on the other hand were more fun and he wanted to jog along too.  About half way along the Greenway, I realized Ray was getting thirsty and we had plenty of success to celebrate, so we headed back to the truck for a nice bowl of water.

For a Friday the 13th, it was a fantastic day and even better, it was the beginning of one of the Best.Weekends. Ever.  Here is a preview of what else Ray did this weekend: