Today was the beginning of a nice three day weekend for me, but it wasn’t all about the relaxing.  Ray had an appointment to have his stitches removed this morning, so we had that ordeal  task to start off the day with.  While I can basically touch Ray anywhere and check for lumps, bumps, scrapes and anything else an adolescent might get into, he’s not as desensitized with others.  He’s not great at getting his nails trimmed, so I reasoned that having someone poke scissors into his leg might not go as planned.

To make the trip easier, I brought one of his blankets from home, a pocketful of his favorite treats and a bully stick to keep him occupied.

I figured we’d have a better go of it if he were occupied with some of his favorite things, but Ray had other plans.  First, I don’t even know if I mentioned this before, but Ray is a nervous pee-er, so he kind of let loose on the floor, the knee of my jeans and a portion of his blanket.  Twice. 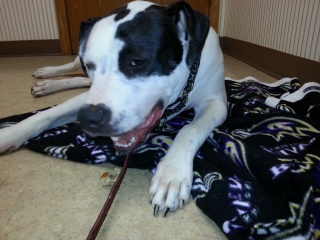 Finally with the doctor, the tech and the mommy not getting anywhere, they suggested that if I leave the room they might have better luck with him…which they did.  After a few minutes out came my bouncy, happy boy without his prickly stitches.   hummmpf.

Then to add insult to injury, on a tip from our friends at Pitlandia I stopped to cash in on some Halloween Haul on sale for Ray, too.  Since he loved the pictures of Athena in her superhero attire,  I got him this great Captain America t-shirt.  The only problem is that the XL was juuuust a little snug. 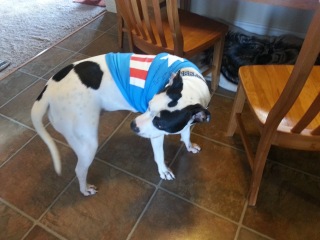 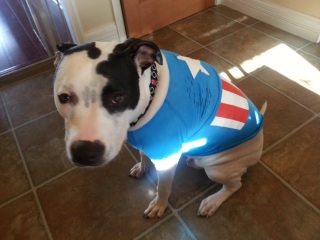 Besides, while Ray-Ray is many things, a superhero really doesn’t fit is personality.  No, with all the sweet comments he gets on Facebook, both on his and my pages, everybody knows Ray-Ray is a Rock Star. 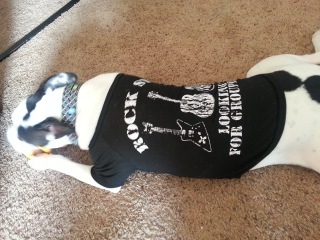 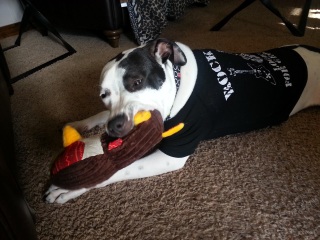 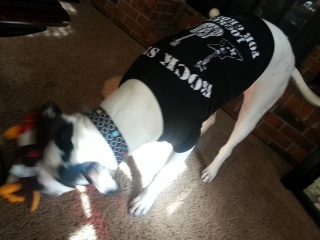 Just call me L.L. Cool Ray.
Did anyone else score some super cheap Halloween schwag?﻿