I hear it again and again and each time I hear it, it annoys the heck out of me though I’m sure that at one time or another I’ve said it myself. I imagine every person who has adopted a dog with a “past” just might hate this phrase. But as a person who adopted a 7 week old puppy and who “found” a 5-6 month old puppy, I hate the phrase and consider it a personal insult.

One of the gals at work regards me as her resident dog expert, I feel not so much for my expertise but for her lack thereof. If someone mentions their dog, she is quick to talk about me and my Pit Bulls and what babies they are. “Well, it’s all in how they’re raised,” is the response she often gets. I must have raised them right. Right?

So about these Pit Bulls of mine. I have a kit for Julius’s dna, but haven’t swabbed him yet, so “breed” isn’t much of a consideration in his make up yet. At 9ish months old, he is nearly as tall as Ray, his feet are bigger and rounder, his tail curls up, his face is longer and the angles are softer. His eyes are almond shaped, dark, dark brown and luminous, giving him and Asian look. He seems slower to learn than Ray, but he also learns from Ray. Julius used to scarf down his food, though now he actually takes time to look up from the bowl and chew his kibble so he seems to know breakfast and dinner will be served every day. 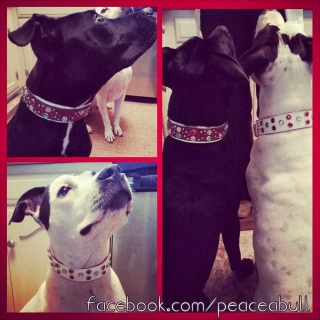 Ray is nearly two years old and while he is heavier-muscled than Julius, he is not a bulky, burly dog. Ray’s dna test shows him to be 50% American Bulldog, 25% Boxer and 25% unidentified mixed breed. (I take that to mean at least a portion to be American Pit Bull Terrier, which isn’t in the test.) There is no Staffie or AmStaf in Ray. His eyes are very expressive; they are an ambery-chocolate color and he often furrows his brow as if he is worried. He trembles at the sound of the mower and the vacuum, but tries to eat the leaf blower. Ray has never missed a meal and used to want to graze, though he has learned to eat faster and finish in one sitting, or his little brother will be more than happy to help.

Ray has taken three group classes at two different locations as well as had private training lessons. He has had five different instructors total in these various endeavors, while Julius has never been to school and while all of Ray’s training has been slightly different, it has, for the most part been through positive training methods and all through reward based training.

From the moment I met Julius right up to this second, there is one word that has always described him. Sweet. Julius is sweet. He’s easy going, drops or surrenders toys and forbidden objects, takes treats soft-ish (usually) and even when he gets excited, isn’t a huge deal. It must be in how he was raised.

Ray, from the second day he was home with us up until nearly a year old had another word to describe him. Asshole. Sorry, but that usually was the best one. Don’t get me wrong, Ray is my shining star, but he was always a challenge. He is much more stubborn when “giving” or “dropping” objects, and though he is gentle now, it took a lot of fortitude to get there. For the longest time, when Ray got excited, he would grab his leash and tug then do a alligator death roll and though we had numerous trainers give us ideas on how to avoid it, moving seemed to be the only sure fire fix.

Ray has never been harmed or threatened or hungry but is much more uptight and more of a worrier than Julius who live his first 5-6 months of life outside, oblivious to the comforts of pillows, regular meals, endless treats and toys. So, did someone raise Julius right while I made Ray into a neurotic, quivering bowl of jell-o?

It couldn’t be that these two dogs who come from different circumstances are just individuals.

11 thoughts on “Nature and Nuture”