Ray has most definitely had a challenging year, but in the best of ways.  We moved to a new home which fortunately doesn’t seem to stress the dogs out, we had Sugar and her pups here for a while this summer, and Ray had TTA surgery which included a log recovery, so when his birthday rolled around I wanted to make sure we had a nice little celebration of his four years. 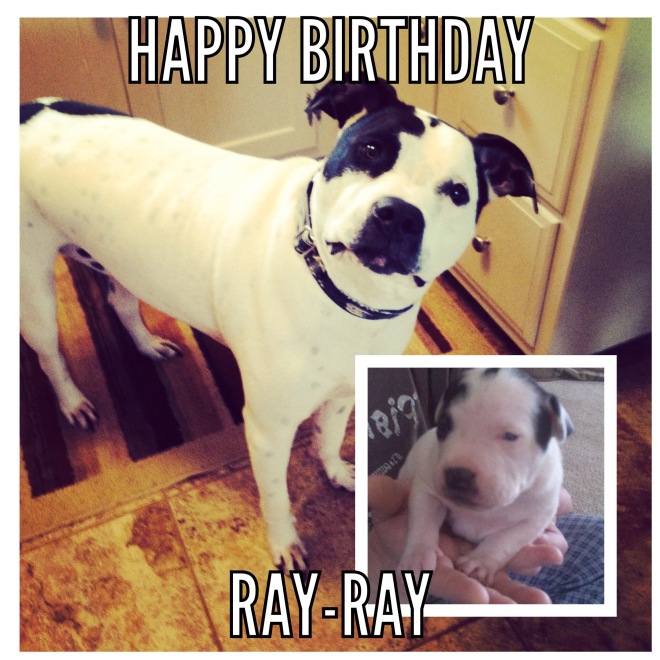 The day began with his little brother being shipped off to day play so that Ray was able to gnaw on the good antler to his heart’s content.  (Half a dozen antlers in the house but only one “good” one).  He stayed at home with his dad and supervised some trim painting, took a few naps and generally had a low-key kind of day.

After work, Ray got to enjoy a walk with his best gal, Sugar followed by party hats for the dogs who wanted and the cat who couldn’t get away fast enough.

Ray is too cool for a hat.

Ray, Julius, and Sugar split a dog bone-shaped birthday cookie and indulged in a nice pig ear party favor and to cap off the celebration, Ray got a new Bumi to chew on.

To be honest, we don’t always do a party with all the dog friends but this year it seemed like the thing to do, since Ray now has another friend* besides Julius.

How do you and your dogs celebrate birthdays?

*Ray and Chance have only seen each other once and Ray isn’t a huge fan, so Chance stayed at home and got his cookie and pig ear delivered.