Nothing irks me more than when people make assumptions about Pit Bull types.  Original, huh?  I know, I know.  All of us who are blessed with Pit Bull ownership and tasked with breed advocacy probably live and breath this sentiment, but bear with me here.  I find that I’ve been guilty of breed bias and not only have I been guilty of it, I’ve been called out in a most good natured way.

I was grateful for the four day weekend which allowed me to do “the family thing,” do “the shopping thing,” volunteer and decorate on each day respectively.  When I found that I would be able to schedule myself for one of the Community Outreach Adoption Events, I was pretty thrilled on several levels.  The dogs at ACSPCA have been unavailable due to many coming down with a cough, so I have not been able to interact with many of them and when I found that some would be able to make it to the Outreach event, I jumped at the opportunity.

I knew my gal, Honor, was not one of the coughers and might possibly be the one I handled. 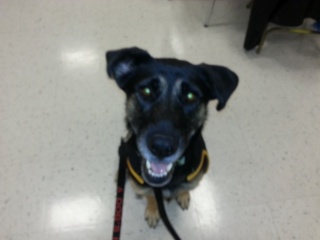 I kind of doubted it though because she is now living in foster, so the chances were pretty high that if she was at the event, she might be handled by her foster.  I was getting excited wondering who I’d be paired with that day.  It’s kind of like Christmas for me each time I go.  I never know who I will find there!

When I arrived, I was greeted apologeticly by E.  “You’ll be handling Rico today.  Don’t be mad at me!”  she said with a pleasant smirk.  “I know you like the big dogs, but Rico is the only one left who can go.”  (One)

To be honest, I was momentarily chagrined, but when I saw Rico’s good natured little face and happy tail, I couldn’t help but crush on him just a wee bit.  We made our way through the lobby and our Volunteer Manager M, said, “That’s quite a change for you!” and I heard him comment to the staff there reiterating my preferences for a larger breed dog.  (Two)

So Rico and I took a little spin about the yard to make sure all biological functions were addressed before embarking and I popped him into the back seat of my Dakota.  I have a nice dog proof cover on the back seat and that is generally where all of my furry passengers ride, including Ray-Ray.  As we were preparing to leave, the Director came running out with a grin to ask me if I was “mentally prepared for handling Rico today.”  (Three)

Rico, however after exploring the back seat from left to right, decided he might not want to ride “like a dog.” 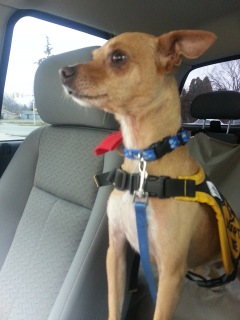 So after investigating all possible seating options, Rico settled quite nicely as my co-pilot for the ride.

Not only was I completely won over by this little man, but he set about busting all of my preconceived notions about little dogs.  Yappy dogs.  Ankle biters.  Little dog complex dogs.  Rico was a perfect gentleman.  He was good natured, cuddly, friendly to dogs, cats, birds and humans alike.  He crawled into the laps of several children and greeted everyone in the store.  He exibited THE. MOST. ADORABLE. play bow to a pair of Yorkies that I’ve ever seen and he did not bark even once the entire time we were together.  I stand abashedly corrected in my sweeping generalizations of certain breeds thanks to the wonderful company of Mr. Rico Sua-vay!

If you are interested in this three year old stereotype buster, contact the Allen County SPCA today!