In our old house, bedtime would be preceded by me, Julius and Ray snuggling on the sofa for a little bit of TV time. The boys would usually fall asleep and I would nudge Julius off the sofa and into his crate to be tucked in for the night, while Ray got covered by a blanket on the sofa. They both mostly stayed in the kitchen/family room areas behind the baby gate and only had the run of the house when supervised, which mostly prevented them from helping themselves to the kitty food and litter box buffet. 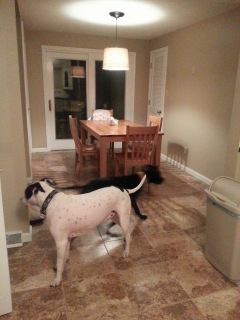 At this house, Juli-bean still has a crate set up but that is now only for the work day and we started off with both boys sleeping in our room. It worked out better than we had hoped for at first. Julius had a little area on the floor that he nestled into and Ray slept on the bed with us.

That lasted two full nights until Julius realized he was being afforded second class canine status and hopped on the bed sometime after midnight. Here’s the dilemma: Julius finds a spot and stays in it all night and Ray constantly finds new positions. First Ray sleeps between us, then he wants under the covers, then he wants to be out of the covers then he wants to be in the covers…you get the idea. Actually once he finds a good spot under the covers, he sticks there longer, but he can’t be shown the good spot, he has to find it on his own. And then there’s the snoring. Ray snores. Apparently he snores loud and long which keeps Kevin up but for whatever reason, I find it comforting and as soon as he snores I fall into a deep sleep.

The solution so far has been to have Julius sleep with the girls. Since he doesn’t fidget, he wouldn’t trample them like Ray would and he still gets to sleep with people at night. The first night went very well but on the second he stood at their door and whined a bit. He finally settled on the bed and I had to wake him up in the morning to go outside.

I know Kevin would prefer Julius who is less of a fidgety bed hog, but Ray is my spoon dog, so we’ll just keep working at the sleeping arrangements.

Do you have sleeping challneges in your home?